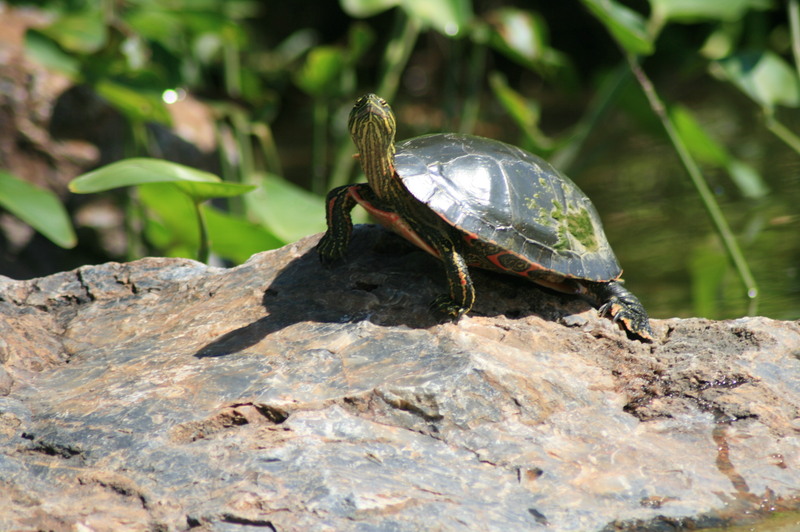 In 2014, Friends and scientists from the Forest Preserves of Cook County identified turtles as water-dependent animals already present in the system whose reproductive success could benefit from help. Working with restoration companies, Friends cleared 135 acres of nesting habitat in 2015-2019 and is currently working on another multi-year project create new nesting habitat.

The average person visiting a body of water in Chicago will probably encounter a painted turtle more often than any other species. They are colorful, and not quite as large as a snapping turtle. The painted turtle has a very similar appearance to the red-eared slider (an invasive non-native turtle) and the two are often confused. The painted turtle can be distinguished because it is flatter than the slider. Also, the slider has a prominent red marking on the side of its head (the "ear") and a spotted bottom shell, both features missing in the painted turtle.

MAKE A PAINTED TURTLE YOUR OWN

By symbolically adopting a painted turtle for a full year for yourself or as a gift, you will support Friends’ Wildlife Habitat Projects and advocate for clean water and healthy habitat which improves the river for the more than 80 species of fish, countless species of birds, beavers, muskrats, turtles, and the even the occasional river otter that call it home. Take a minute to learn more about our other wildlife habitat projects.

We offer different adoption package levels to select. Your donation also includes a 12-month membership along with discounts on canoe trips, free McCormick Bridgehouse & Chicago River Museum membership, and tickets to our other events. 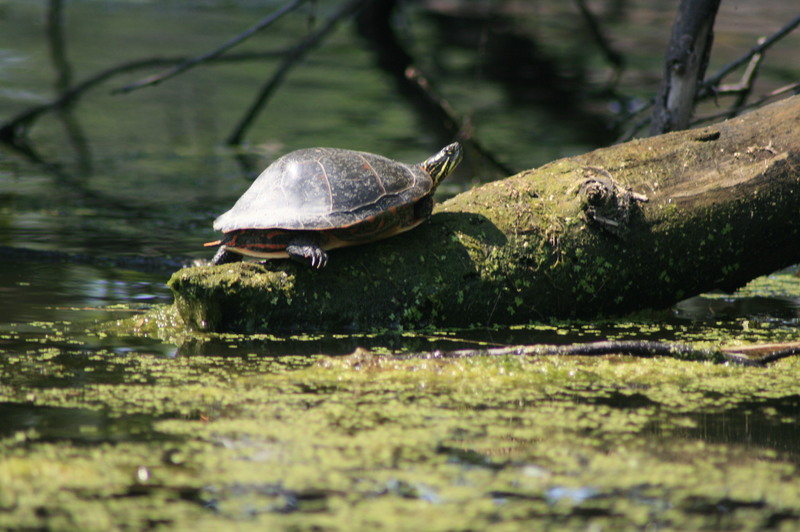 Want to adopt an osprey or channel catfish too? You’ll receive a discount of 20% if you also select two or all three wildlife packages.

Painted turtles have the largest range of any North American turtle and are abundant throughout their range, mainly because of their ability to adapt to aquatic environments.

They are brightly marked with red and yellow markings on a black or greenish brown background and have a smooth shell about 90 to 250 mm long. The shell protects the turtle from predators, but because their ribs are fused to the shell, the turtle must force air in and out of the lungs by contacting the flank and shoulder muscles.

During the day, painted turtles sunbathe in large groups on logs or rocks. Basking in the sun helps the turtles get rid of leeches and other parasites. They are the most active from March to November and during the winter they hibernate by burrowing into the mud. Males look for mates in the early spring and are known to move between aquatic habitats during mating season.

Painted turtles can be categorized as omnivores meaning they eat food of both plant and animal origin. Young turtles feed on a wide range of small animals such as carrion, snails, tadpoles, small fish, and insects. As turtles mature they acquire a taste for aquatic plants. The painted turtle does not have teeth and therefore they have strong jaws to grip their food. They must eat their food in the water since their tongue does not move freely and they cannot manipulate their food well on land.