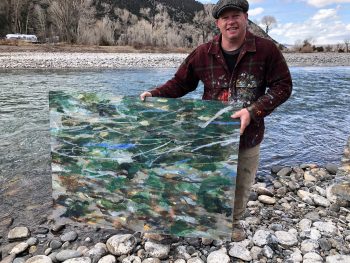 Friends of the Chicago River is pleased to host Miller who uses a distinctive painting technique: “He stands about twenty feet away from a work-in-progress and paints with sharp, repeated strikes from the end of a 13-foot casting rod and nine feet of line.”

He will begin painting at 10:30 a.m. and the finished work will be revealed at approximately 5:00 p.m.

Miller is a Montana-based painter best known for his Endangered Rivers series which he began out of his deep passion for raising the awareness and importance of river preservation. The Endangered Rivers paintings, like the rivers themselves, are complex layers of color and transparency. He has spent the past seven years painting the endangered rivers of Colorado and Montana.

"I am excited to be painting the Chicago River," said Miller. "I think the purpose of my work as an artist is to express my love for the rivers and especially the technique and concept in how they are created."

He is one of 16 artists in the PROFILE section of Expo Chicago, the international art fair that opens at Navy Pier on Thursday, April 7 and runs through Sunday, April 10. The finished work of the Chicago River will be on display at Expo Chicago.

This will be Miller’s first major solo presentation outside of New York City. A portion of sales proceeds of the painting will benefit Friends of the Chicago River.

You can also watch a short film about Miller’s work called Rhythms of the River which explores his personal history, creative process and captures the creation of the first of his large-scale river murals.