Heavy rainfalls and rapid snow melting can tax the region's sewage system, resulting in untreated wastewater being released into the Chicago River system.

The regional combined sewer system cannot always handle the amount of rain that falls in addition to the daily load of sewage and industrial waste. In addition, parts of the region rely on separated sewer systems and also see harmful pollutants sent directly into the river system through stormwater outfalls.

As little as .3 inches of rain, depending on the location and severity, can trigger a combined sewer overflow at any number of the more than 300 outfalls that flow directly into the Chicago River and Little Calumet River.

Our effort #OverflowAction Day is an attempt to relieve pressure on the system to protect the river system. Based on the concept of Ozone Action Days, Overflow Action Days alert people that before, during, and after rain storms we need to reduce the amount of water that goes down our drains and the chance of combined sewer overflows.

Here are some things you can do:

Reduce your shower time: A ten minute shower can use as much as 40 gallons per minute. Depending on your showerhead, reducing your shower by three minutes can save between eight and 22 gallons of water.

Turn off the faucet: You can conserve water and reduce the amount you are putting back into the system by turning off the faucet when you do not need water, such as while brushing you teeth, doing dishes, washing your face or cleaning. Don't let the faucet run while cleaning vegetables. Fill a jug with water and put it in your refrigerator rather than letting the water run from the faucet to get a cold drink.

Fix your faucet: A faucet that leaks 60 drops per monute will waste 192 gallons per month or 2,304 gallons per year.

Delay laundry: Rainy days are lazy days. You have our permission. Delaying laundry will reduce the amount of soapy water that might end up in the river.

Dish washing machine: Delay dish washing. But if you must wash dishes, use a dishwasher if you have one. Running a full dishwasher requires about 20 gallons of water compared to 40 gallons if you washed the same number of dishes by hand.

Flush less: Each flush can use between 1.6 to five gallons of water. Replace leaky toilets. Products bearing the waterSense label can save nearly 13,000 gallons of water per year. Don't use the toilet as a wastebasket. It's estimated that 75 percent of water used indoors is in the bathroom and a quarter of that is through toilets.

Remove downspouts from the storm sewer: Install rain barrels to capture water from downspots and store it for later use. A downspot can dump as much as 12 gallons per minute into a swollen sewer system.

Natural Landscaping: Use native vegetation whenever possible as oppsed to turf grass and ornamental plantings. Native plants have root systems that extend down three to 10 feet or more. In contrast, the root zone of turf grass typically extends only about three to four inches, the city's department of water management says.

Permeable Paving: Use paving blocks or grids rather than asphalt or concrete to reduce runoff  into the sewer system.

Find Out More About It

The purpose of Overflow Action Days is to minimize the amount of water that goes into the sewer system. Water conservation can play an enormous role in protecting our rivers. 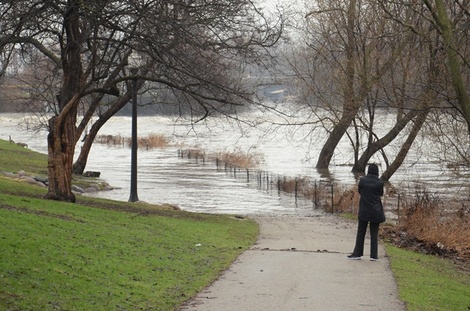 Since the the Metropolitan Water Reclamation District of Greater Chicago (MWRD) treats all water that enters its sewers, any water conserved effectively increases treatment capacity. If concentrated and timed properly, Overflow Action Days has the ability to offset combined sewer overflows throughout the Chicago River system.

In 1975 the MWRD began construction of the Tunnel and Reservoir Plan (TARP). The system captures excess stormwater and wastewater until it can be treated a one of three MWRD plants.  TARP was designed to prevent flooding and combined sewer overflows. However, while the system of tunnels and reservoirs has contributed to significant improvements in water quality, the reservoirs are not complete and climate change has exacerbated these issues.

Why should you act now?

The Chicago metropolitan area cannot rely solely on MWRD’s tunnel and reservoir system to solve flooding and sewer overflows (CSOs). Climate change forces us to act collectively and to support multi-pronged approaches to reduce the environmental and economic damages of these extreme rain events.

Climate change is making it harder to manage stormwater and prevent CSOs in the Chicago metropolitan area. Heavy isolated rains and 100-year storms now occur every couple of years and can overwhelm the system.

Weather data shows that the number of 100-year rain events has nearly doubled over the past century due to a rapidly changing climate. The increase in 100-year rain events necessitates that we increase capacity in our sewer system, demanding both water conservation and water storage (TARP and on site storage). 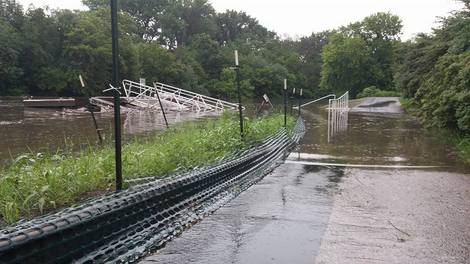 For a press kit, please scroll to bottom of web page and click on Press.