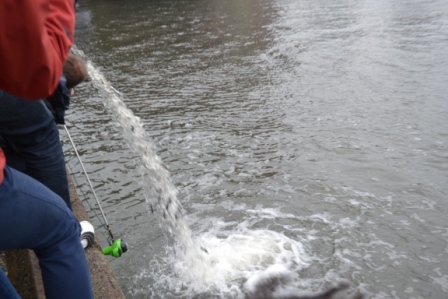 On Tuesday, June 10 Friends of the Chicago River and the Illinois Department of Natural Resources (IDNR) released 30,000 one year old channel catfish into the Chicago River system as the first step in a spawning habitat restoration project funded by a $300,000 grant from the National Fish and Wildlife Foundation’s Chi-Cal Rivers Fund. The project, which includes the installation of 400 constructed nesting cavities for channel cats at eight locations ranging from the North Shore Channel to the Little Calumet River, will help this critical species repopulate the system after years of degradation limited its breeding success. Ten thousand were released at the confluence downtown and 20,000 were released into the Little Calumet River. Over the next 18 months another 70,000 fish will be released throughout the system.

“This is an exciting moment in the river’s recovery process,” said Margaret Frisbie, Friends’ executive director. “These fish are the vanguard for the many thousands of channel cats and other species that will one day call the river home. The water quality and the rules that govern the river have improved enough so we can do these kinds of projects and know we will see success. Projects like this demonstrate that we do not have to rely on natural habitat solely. We can create habitat and wildlife can thrive.”

“The channel cat is a fish that appeals to fishermen and the public as a whole,” said Marc Miller, IDNR director. “The IDNR is dedicated to protecting and restoring our natural resource heritage across the state and especially in urban areas where so many opportunities lie in places like the Chicago River system. These kinds of investments boost the quality of life for millions of Illinoisans and the wildlife with whom we share the state.”

“The Metropolitan Water Reclamation District is committed to our water environment and improving and protecting these critical resources,” said MWRD President Kathleen Therese Meany. “It is satisfying to see the many years of work culminate in wonderful possibilities in our waterways. We are proud to partner with Friends of the Chicago River who also share our vision.”

In recent years, fish communities have responded to these improvements and there are more native species in the river. However, in many cases they are still low in numbers or sporadic in occurrence.  A lack of habitat has been identified as one of limiting factors to fish reproduction success. This fish habitat project will also benefit largemouth bass and sunfishes such as bluegill and pumpkinseed sunfish and serve as a charismatic invitation for people to think beyond the banks and consider how what they do at home can impact the Chicago River.

Overall there are about 70 species of fish in the river, many species of birds including state endangered black crown night heron as well as a host of other wildlife such as beavers, muskrats, turtles and even the occasional river otter. While there is still work ahead to improve water quality on the Chicago River, conditions have improved markedly and the approval of new aquatic life standards pending at the Illinois Pollution Control Board will continue that work.

The channel catfish release coincides with Friends’ Think! Beyond the Banks campaign, launched in partnership with the Wrigley Company Foundation, as an environmental initiative to bring appreciation to this important metropolitan water way and encourage community involvement each day.

To learn more about this project and for general information on channel cats, click here for the fact sheet.

To view the press release for this event, click here.

Friends and IDNR recommend carefully reading the advisory for fish consumption posted on the IDNR website before eating any fish out of the Chicago River or any other body of water in the state of Illinois.