And They All Jumped In 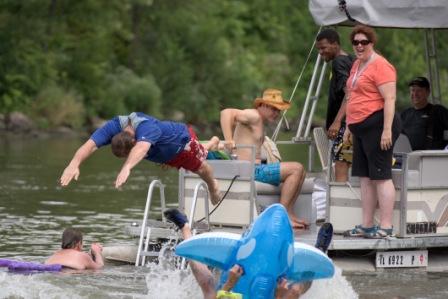 Participants jumped off between Chatham Street and Western Avenue in Blue Island, as dozens of spectators viewed from the MWRD's waterfall, also known as a Sidestream Elevated Pool Aeration (SEPA) station. Plungers included MWRD Executive Director David St. Pierre and Alfred Saucedo, aide to MWRD Commissioner Debra Shore, and representatives of the Friends of the Cal-Sag Trail, South Suburban Mayors and Managers Association, the village of Blue Island, the Metropolitan Planning Council, the National Park Service, the Center for Humans and Nature organization and Friends of the Chicago River.

The plungers raised nearly $18,000 towards construction of the remaining 13 miles of the 26-mile Cal-Sag Trail. The funds will also help install improvements to the existing trail, such as water fountains and benches.

"It was pretty funny and it was marvelous," said Margaret Frisbie, Executive Director of Friends of the Chicago River. "The Plunge signifies a turning point in the river system's history that is monumental -- really and truly monumental."  Matt Binns plunged on behalf of the Friends.

"Congratulations to our plungers who dove into support the Cal-Sag Trail and showed us that cleaner waters are becoming a reality," said MWRD President Mariyana Spyropoulos. "Between the trail installation and the improved water quality in the channel, the Cal-Sag is sure to become a future center for recreation and economic opportunity."