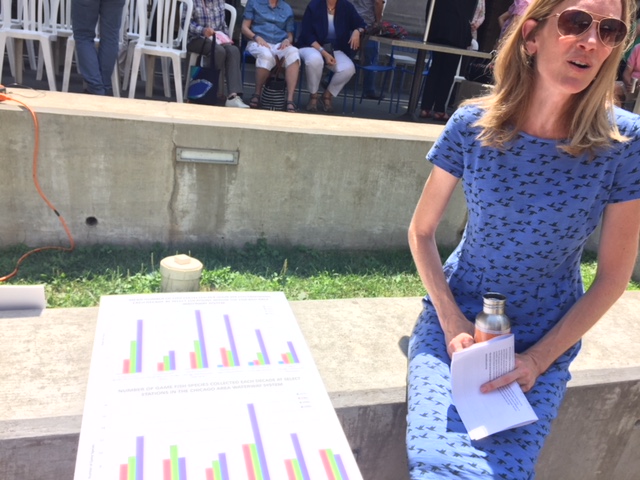 Folks certainly brought their Qs, pushing the lunch-and-learn past the usual half hour. Wasik, an aquatic biologist, had the As.

Here are three things you might not know about the Chicago River system.

1. Fish habitat has been improving tremendously since the 1970s for the Chicago River system. Wasik presented two charts illustrating that improvement. 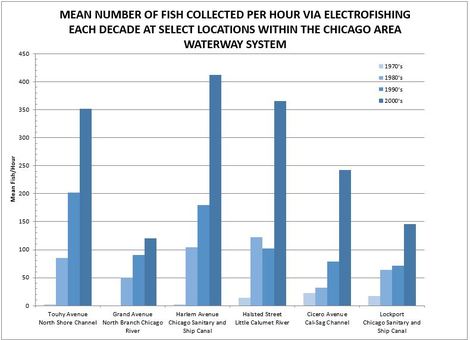 Mean number of fish collected per hour at select locations. 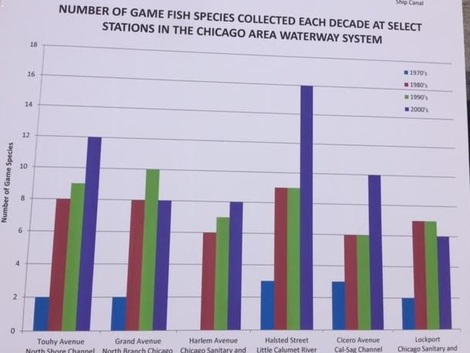 The number of fish species found has gone from 10 in the 1970s to 76 in 2016 by MWRD calculations. About a third of the 76 are desirable game fish species, she said, adding that Friends of the Chicago River, along with the Illinois Department of Natural Resources, have added about hundreds of thousands of catfish along with hundreds of concrete tube nesting cavities. Bass and crappie are popular.

2. Many people notice the differences in color of the river merging around Wolf Point downtown, where the main branch (that runs under Michigan Avenue) connects with the North and South branch just west of the Merchandise Mart. The reason: The main stem is primarily cooler lake water. The water in the branches is typically warmer and also darker from bank erosion and sediment. The cooler lake water is denser and when the different temperatures hit, the clearer lake water sinks and pushes up the cloudier branch water. 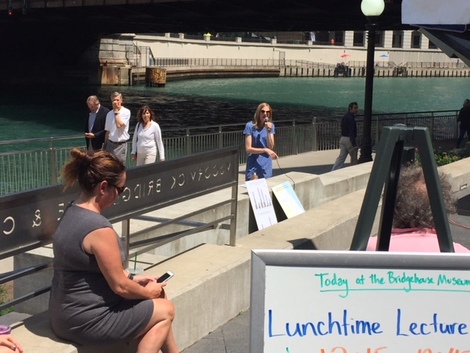 3. While the river is far cleaner than it has been in years, it still faces challenges to its water quality. One challenge is chloride levels from what is commonly refered to as road salt. “Once it’s in the water, it’s extremely hard to get out,” Wasik said. Chloride not only harms fish and other waterlife but essential plants that grow in and around rivers.

While she acknowledged that keeping roads and sidewalks clear of ice and snow is a safety issue, the district is working with local governments and others on best practices. One way to reduce the problem is making a brine by mixing salt with water until the salt dissolves, then spraying roadways and sidewalks. Another helpful approach is to avoid oversalting. For homeowners, one coffee mug of salt should be enough to cover 20 feet of driveway or 70 feet of sidewalk. 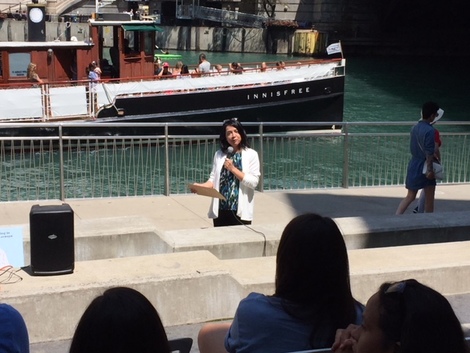 Mars Wrigley Confectionery has been a solid supporter of Friends of the Chicago River and hosts a signature site on Goose Island for our annual clean up effort, Chicago River Day. In 2016, Friends launched the pilot of a new initiative supported by the Wrigley Foundation, the Litter Free North Shore Channel project. #LosetheLitter.

The foundation's support is essential to Friends' efforts to keep trash out of the river as well as studying its causes and impact through data collection and outreach.

Our Monday lecture series are held on the museum's beautiful plaza on the Riverwalk at the southwest corner of Michigan Avenue and Wacker Drive. They start at 12:15 p.m. and run about a half hour.

Next up: Veronica Kyle, Chicago Outreach Director, Faith in Place on Monday, Aug. 6.