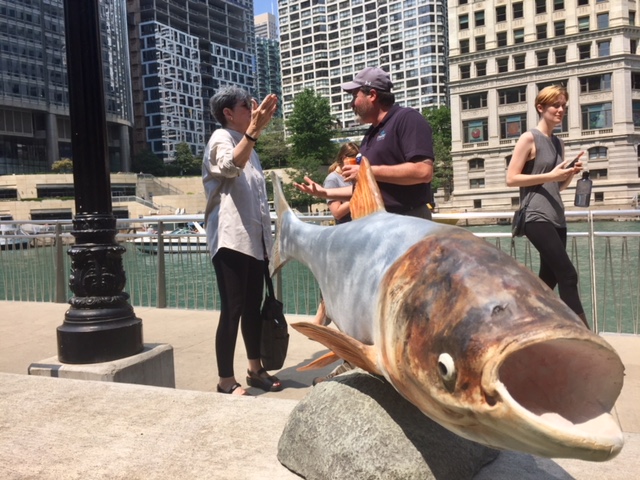 This summer’s McCormick Bridgehouse & Chicago River Museum Lunchtime Lecture series includes a researcher who studies plastics and wildlife, a parks official on the positive effects of removing dams, and the design aspects of riverside development.

The weekly series is held on Mondays July 8 through August 26 from 12:15 p.m. to 12:45 p.m. on the museum’s plaza on the Chicago Riverwalk. The museum is located in the southwest bridgetower at Michigan Avenue and Wacker Drive in Chicago.

The speaker series is free.

July 8: Tim Hoellein, Loyola University. Hoellein’s work as an aquatic ecologist in Loyola’s biology department focuses on litter and its effects on aquatic wildlife. He is a member of the Friends-initiated Litter Free Task Force Committee examining trash on the waterway.

July 22: Lauren Umek, Chicago Park District. Umek, an urban ecologist, was the Chicago Park District project manager for the removal of the North Branch dam at River Park. Built in 1910, the dam was eliminated in 2018 in an effort to open up another 20 miles of the river for fish and to make paddling safer.

July 29: Mejay Gula, School of the Art Institute of Chicago. An architect and lecturer, Gula curates the Tender House Project in which students develop new ways to use Chicago’s vacant bridgehouses.

Aug. 19: Jennifer Wasik, Metropolitan Water Reclamation District. Wasik is the Principal Environmental Scientist for the MWRD, which is responsible for the reclamation and treatment of wastewater. Wasik’s areas of expertise include water quality, fish, and phosphorous reduction.

Friends of the Chicago River opened in the McCormick Bridgehouse & Chicago River Museum in 2006 to provide new access and understanding of the dynamic relationship between Chicago and its river. Today, the Bridgehouse Museum stands as the cultural anchor of the new Chicago Riverwalk and welcomes tens of thousands of visitors every summer. Exhibits celebrate the river system and the city’s world-famous movable bridges.