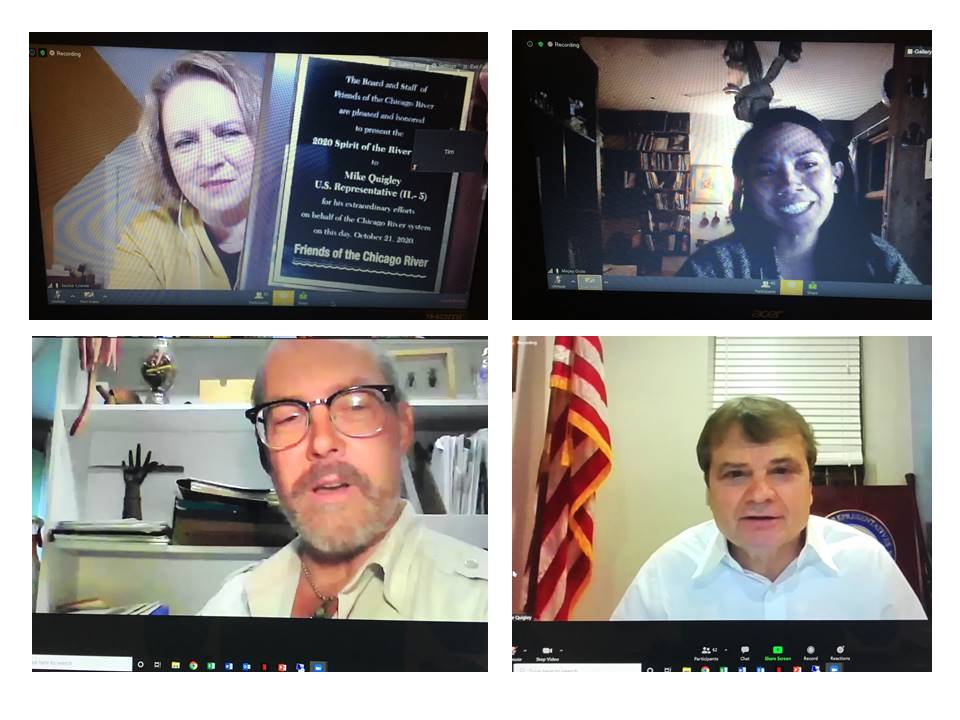 Friends of the Chicago River announced the winners of its annual awards which honor exceptional efforts on behalf of the Chicago River system. The recipients of the 2020 River Commitment Awards include Mejay Gula, an architectural designer and curator; Jeff Daube, a volunteer canoe guide and park advisory council member; and U.S. Representative Mike Quigley (IL-05).

The awards –River Champion, Volunteer of the Year, and Spirit of the River – were presented at Friends’ annual meeting and volunteer appreciation event held virtually October 21 where Friends’ members, active volunteers, and supporters celebrated the success of Friends’ work in this unprecedented year.

In presenting the awards, Friends’ Board Member Jackie Loewe said: “We know it takes all of us, working together, to successfully address the river’s legacy of abuse and to overcome the complex problems that remain. The many leaders, partners, and volunteers who work toward a healthy river system are critical, so we are pleased to recognize people instrumental in improving and protecting the Chicago River system. This year’s honorees are exceptional in their commitment to the Chicago River system.”

The Spirit of the River award is given to a person whose character, efforts and enthusiasm most embody the spirit of the river. The 2020 Spirit of the River award honors U.S. Representative Mike Quigley (IL-05), a longtime, active supporter of Friends of the Chicago River, and an environmental champion in Congress. Congressman Quigley demonstrates his commitment to the river through his active participation in many of Friends’ signature events. In February, the Congressman attended the Chicago River Student Congress, inspiring students of all ages to be good stewards of the river system and our other local natural resources. He is a strong supporter of Friends’ annual Chicago River Day and has served as a Site Captain for the annual event for many years. This year, when Friends adapted its annual Chicago River Day to the My Chicago River Summer Challenge, Congressman Quigley enthusiastically helped kick-off event and hosted his own litter cleanups with other elected officials.

“Congressman Quigley’s efforts have a lasting positive impact on the health of the river system, Friends’ staff, members, volunteers and the next generation of river stewards,” said Loewe. We are so grateful the river is more than a crucial piece of his policy agenda; he truly has river water in his veins and he understands how important the river is to community wellness, vitality, and quality of life.”

In accepting the award Congressman Quigley paid homage to the people who founded Friends of the Chicago River over 40 years ago. “This is a great honor; I also want to thank the Chicagoans who in 1979 had the foresight to think about this [the river] and the great work that spawned from it, said Quigley.  “I can’t thank you enough.”

The River Champion award is given to an individual for extraordinary leadership and professional effort on behalf of an organization to improve the Chicago River system. The 2020 River Champion award honors Mejay Gula an architectural designer, curator, and cultural development strategist. Her work, the Tender House Project, is a master’s course at the School of the Art Institute, Architecture Department which activates the latent potential of Chicago’s underutilized bridgehouses.

In 2018, Gula began working with the McCormick Bridgehouse & Chicago River Museum by programming a temporary exhibit highlighting student projects, which continued in 2019 and 2020. This work has expanded to include diverse local cultural and arts organizations, by coordinating a musical performance with a bridge lift, an education program related to bird-friendly architecture, the recording of a podcast, and more. Even in this challenging year, the Tender House Project found a way forward by working with architecture students to create innovative design proposals for a rendering of a hypothetical riverfront office for Friends of the Chicago River.

“Mejay is a fierce advocate for the Chicago River system, its adjacent land, and buildings,” said Loewe. We thank Mejay and recognize her for highlighting the value and possibilities of the Chicago River and its network of historic bridgehouses.”

“Receiving this award is an absolute honor and it fuels the energy to keep fighting for activating these bridgehouses,” said Gula. “A lot of the inspiration comes from the work that Friends of the Chicago River has done with the McCormick Bridgehouse & Chicago River Museum; considering that it is the only publicly accessible bridghouse in Chicago and that it’s used in a way that amplifies Friends’ mission for the betterment of the Chicago River.”

Volunteer of the Year: Jeff Daube

The Volunteer of the Year award is given to an extraordinary individual whose volunteer efforts improve and protect the Chicago River system. The 2020 Volunteer of the Year award honors Jeff Daube, a volunteer canoe guide who hauls canoes to and from numerous paddles throughout the year creating opportunities for people to experience the river. A partner in Chicago River Canoe and Kayak, Jeff’s vast experience with human-powered craft on the Chicago River system strengthens, enhances, and informs the canoe program immensely. He is also an active member of the Clark Park Advisory Council, partnering with Friends to host events like Chicago River Day, and World Water Monitoring Day. As a Treekeeper, his knowledge of tree care, volunteer management, and advocacy for the stewardship of woodland habitats all contribute to a healthier Chicago River system.

“Jeff’s unique combination of knowledge, skills, effort and generous spirit makes him the perfect recipient for Friends’ Volunteer of the Year Award,” said Loewe. “He’s always there to help when volunteers from corporate groups and the community want to come out and help care for and improve the river. All of these traits make Jeff a cherished volunteer, and his enthusiasm, warmth, and good humor make him a pleasure to work with.”

Daube thanked Friends’ staff and all the volunteer canoe guides who help people learn about the river, and he reminisced about being introduced to the river as a boy, saying: “I think I remember actually volunteering as a Cub Scout in one of the first River Days back in ’79,” said Daube. “So I like to think that what I’m doing today in introducing people to the river; that one day they’ll come back and work with us as well.”