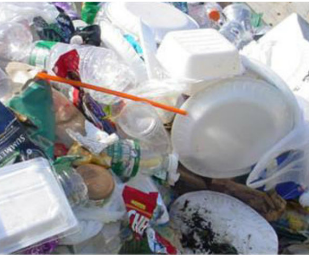 Friends of the Chicago River is disappointed in the new single-use plastics ordinance passed by the Chicago City Council on September 14 because it fails to go far enough to curb plastic pollution and eliminate polystyrene used in foam takeout containers and drinking cups.

The City Council voted 37-10 to ban restaurants from giving out single-use utensils, stirrers, toothpicks, napkins, cup sleeves and disposable plates unless requested, however drive-thru restaurants, airports, and charity food giveaways are exempt from the rule. The ban doesn’t include straws, cup lids or food takeout containers, or apply to “self-service stations,” where customers can grab their own napkins or condiments either.

The ordinance was approved over opposition from alderpeople who wanted a more sweeping plastics crackdown. An original version of the proposed ordinance was changed to allow some leeway for local businesses recovering from the pandemic. Friends of the Chicago River supported the more comprehensive “Plastic-Free Water” ordinance that was introduced last year by Alderperson Scott Waguespack (32nd) that would have banned polystyrene containers and require reusable plates and dishes when dining-in at restaurants among other provisions. Alderperson Waguespack’s ordinance was supported by a host of environmental organizations including the Shedd Aquarium and Illinois Environmental Council.

“This ordinance is too weak and has too many exemptions to be effective in significantly tackling the problem of single-use plastics,” said Margaret Frisbie, executive director of Friends of the Chicago River. “Cities across the country and countries around the world have taken much greater strides, so it’s disappointing to see Chicago barely put a dent in the problem.”

Los Angeles struck the right balance in an ordinance passed recently, which gave restaurants with under 26 employees six additional months for implementation. The City of New York has also taken action in 2019 with an executive order signed by Mayor Bill de Blasio that bans the sale and provision of single-use polystyrene food and beverage containers.

The Chicago River is cleaner than it has been in generations. Despite that fact, there is still an inordinate amount of garbage in the river. To help address the stubborn problem of litter, Friends established the Litter Free Chicago River initiative with a task force comprised of a diverse set of stakeholders from the non-profit, private, academia, and government sectors who work together to eliminate litter from the river system. As a part of this work, Friends supports and advocates for meaningful legislation that eliminates single-use plastics, including participating in the Coalition for Plastic Reduction of which Friends’ Policy Manager Chelsey Grassfield participates in the Steering Committee and oversees the Education and Advocacy Committee.

The Litter-Free Task Force hosts quarterly webinars to provide updates and news. The first of these webinars was held this past Thursday and included Anne Vela-Wagner, executive director of the Mars Wrigley Foundation; Tim Hoellein, associate professor at Loyola University Chicago; and Commissioner Kim Du Buclet of the Metropolitan Water Reclamation District. You can watch the webinar here.