Habitat Matters No Matter How Small 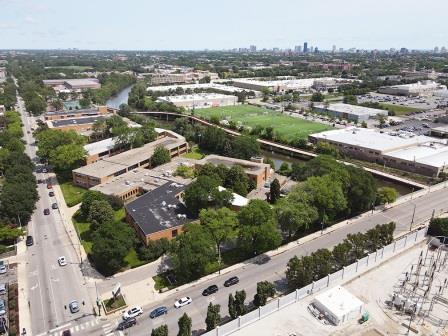 Aerial view of the former DePaul College Prep campus in Chicago with patches of biodiverse habitat in the foreground and along the river's edge. Photo courtesy of the Congregation of the Resurrection.
January 29, 2022

Small patches of urban landscape are easily overlooked habitat gems, brimming with wildlife such as migratory birds, and other animals taking shelter. These patches are critical micro-habitat zones that play an important role in connectivity corridors throughout the river system. Friends’ recently released Habitat Connectivity Action Plan includes a look at the biodiversity of these small patches and their contribution to a healthy and connected river system.

One site where smaller patches of biodiversity are evident is the former DePaul College Prep campus on Chicago’s Northwest Side on the banks of the North Branch. In order to understand the animals who live there and what needs to be protected, Friends collaborated with the Chicago Audubon Society and Friends of the Forest Preserves in September to conduct a mini bio blitz to observe the rich biodiversity on the site. Numerous migrating and nesting bird species were spotted including warblers, American restarts, Swainson’s thrushes, and great blue herons. Cabbage butterflies, painted turtles, eastern forktail damselflies, and other dragonfly species were also observed along the river there. The former campus was being explored as a large residential development but a zoning change for the property was rejected by Alderperson Rossana Rodriguez-Sanchez (33rd) in December. Friends attended public meetings about the development plan and shared biodiversity findings with the alderperson. We shared our ideas about taking a river sensitive approach to the master plan for the site, including protection of existing habitat, maintaining river-edge open space appropriate to the scale of the development, and ensuring public access.

“To achieve broader ecological and community health, we need to think beyond already protected natural areas to consider landscapes that exist in unexpected places,” said Adam Flickinger, planning director at Friends of the Chicago River. “Streetscapes, residential yards, green roofs, and utility corridors can all play a dynamic role in shaping the ecological function of the Chicago River system, especially in the wake of biodiversity loss due to the climate crisis.”

With tools such as our River-Edge Development Guide, and our Public Land Assessment Tool, Friends works with public and private property owners to ensure that each new development maximizes the use of innovative design strategies to realize our blue-green corridor vision. View our habitat connectivity StoryMap and learn more about our river edge development advocacy work here.