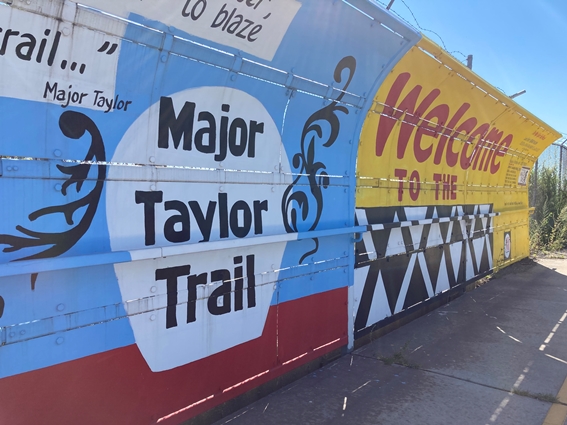 On the bridge over the Little Calumet at Whistler Woods is a mural honoring Marshall “Major” Taylor.
June 19, 2022

In solidarity with our partners across the Chicago-Calumet River system we honor Juneteenth – June 19 – as a catalyst for racial equity and social justice in our nation.

This revered holiday is dedicated to the end of slavery and to commemorate the freeing of enslaved African Americans in Texas on June 19, 1865, two and a half years after the Emancipation Proclamation. Juneteenth calls on us to reflect, honor, and celebrate the important history of African Americans in our region, and to renew our commitment to the building of a just society.

One beautiful place of reflection is Whistler Woods along the Little Calumet River in south suburban Riverdale. The 137-acre forest preserve is part of historic Major Taylor Trail named for Marshall “Major” Taylor, who was an African American bicycle racer and civil rights advocate who won races around the world from 1896 to 1910. Taylor was one of the first African American athletes to become a world champion in any sport. He was known for many years as the fastest bicycle rider in the world. On the bridge over the Little Calumet at Whistler Woods is a 400-foot mural honoring Taylor’s legacy, created by Chicago artist Bernard Williams. The mural panels include dates of Taylor’s championships, names of cities where he raced, and visual representations of the cyclist. Explore the trail on your own or join events happening along the trail with local organizations like Major Taylor Cycling Club Chicago, Friends of the Major Taylor Trail, and Major Taylor Trail Keepers Chicago.

Nearby, The African American Heritage Water Trail memorializes the remarkable stories of African Americans who established vibrant communities along the Little Calumet River. The water trail begins at Beaubien Woods and promotes the exploration of 29 significant African American sites along the river and inland between Beaubien Woods and the Village of Robbins. Experience the Water Trail on a guided event on Saturday, July 23 with the Forest Preserves of Cook County, Openlands, and Friends of the Chicago River. And follow the Openlands and Paddle Illinois Water Trails event page for more opportunities to get out on the water.

We encourage you to experience these important sites. You can learn more about Whistler Woods, the Major Taylor Trail, Beaubien Woods, and the African American Heritage Trail on our Inside, Out, & About podcast.