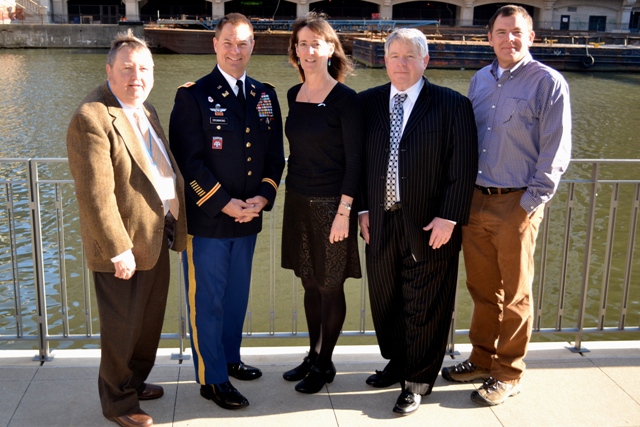 On April 16, Friends of the Chicago River honored Tony Watrobinski, Col. Fredric A. Drummond Jr., and Matt Kauth with its 2013 River Commitment Awards.  These awards recognize the extraordinary efforts of the recipients to aide in the protection and improvement of the Chicago River.

Colonel Fredric A. Drummond Jr. received the 2013 River Champion Award.  Friends bestows this award on its recipient for extraordinary efforts and leadership by an individual working on behalf of an organization.  Col. Drummond is Commander of the U.S. Army Corps of Engineers, Chicago Division.  He received this award for his leadership with the Army Corps and their efforts and commitment to restore and improve the Chicago River.  Friends specifically recognized Col. Drummonds’ leadership to work with communities on stormwater management and streambank restoration projects that will make the Chicago River more accessible to people, hospitable to wildlife, and conducive for natural vegetation.

Friends also recognized Matt Kauth as their 2013 Volunteer of the Year—given for extraordinary volunteer efforts on behalf of the individual to improve and protect the Chicago River system.  Mr. Kauth received this award for his extraordinary efforts and commitment to the Friends’ Gullywalking project, which trained volunteers to find, measure, and document gullies along the Chicago River.  Gullies come from poorly managed rainwater that washes soil and debris into the river damaging our landscape and waterways.  Mr. Kauth’s efforts went above and beyond his initial commitment and showed a pledge to exposing more people to the magic of the Chicago River.

“These awards show the passion and commitment that exists for conservation along the Chicago River,” said Friends’ executive director Margaret Frisbie, “these individuals exemplify our mission at Friends to make the river a better place for the people, plants, and animals who call it home.”