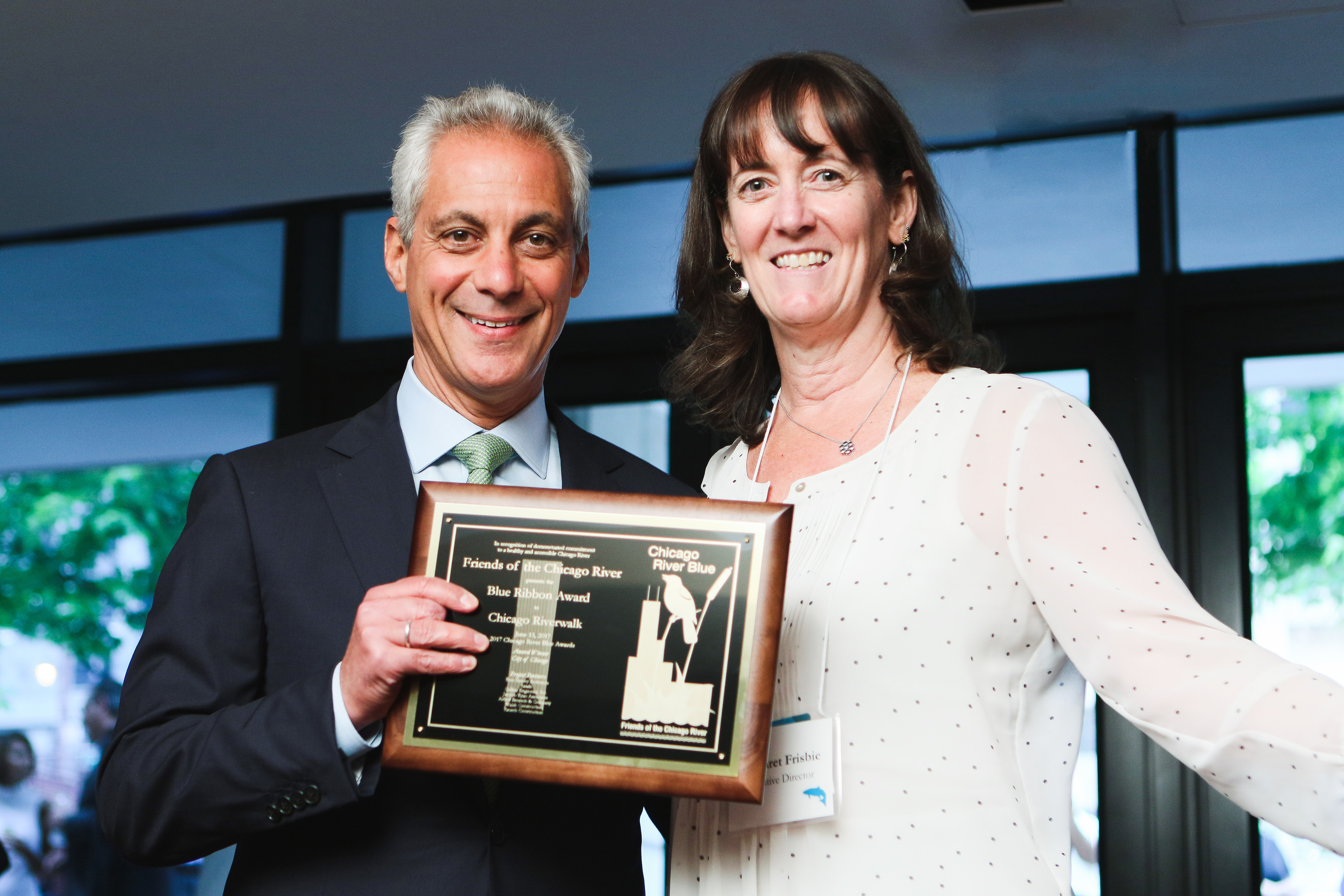 “Friends congratulates the recipients of this year’s Chicago River Blue Awards for their innovative projects that bring the river to life,” said Margaret Frisbie, Friends’ executive director.  “The winners were selected because their projects protect the river from stormwater runoff, provide habitat for wildlife, or create places for people to enjoy nature, or all three.” The top prize, the Blue Ribbon Award, was bestowed upon the Chicago Riverwalk which has become one of the hottest destinations in the city and provides people an opportunity to enjoy the river from close up, “Now people no longer need to look down at the water,” Frisbie continue. “They can get close and enjoy the river’s magic and majesty at the same time they start to better understand some of the complex issues we face in cleaning it up.”

“I would like to thank Friends of the Chicago River for the Blue Ribbon Award,” Mayor Emanuel said. “The Chicago Riverwalk has redefined how people interact with the Chicago River, creating stunning new spaces that feature a variety of opportunities for recreation, education and entertainment. The City is grateful for the recognition and continued partnership of Friends in our efforts to revitalize the Chicago River.”

The recently-completed Chicago Riverwalk has claimed the top prize, the Blue Ribbon Award, in this year’s Chicago River Blue Awards. The Riverwalk has positively changed the conversation about what river-edge development can and should be. It features unparalleled design and creativity that connects people with the water and with the plants and animals of the region. Running from Michigan Avenue in the east, all the way to Franklin Ave in the west, the completed Riverwalk passes through six unique “rooms,” each with its own focus and feel. Along the path, visitors will encounter water access points, native plantings, and Friends’ own Bridgehouse Museum, among other attractions. On any given day, crowds can be seen walking, biking, or jogging on its path, fishing over its edge, tying up boats to its docks, hailing a water taxi, or just sitting back and enjoying the beautiful and unique scenery. The Riverwalk continues the revitalization of Chicago’s downtown riverfront area and truly provides visitors and residents alike with an amazing experience showcasing visionary thinking about what is possible for all future riveredge developments. Friends of the Chicago River is thrilled to honor this great work, and was pleased that Mayor Rahm Emanuel was on hand to attend the ceremony and accept the award alongside Ross Barney Architects and all of the other partners.

The Wolf Point site, located at the confluence of the North and South Branches and the Main Stem of the Chicago River, is one of the most prominent and historically significant pieces of land in Chicago. It was the location of many of the City’s first buildings, as well as home to the first ferry and bridges across the Chicago River. Today, the site is being transformed, as witnessed by Wolf Point West, one of three new buildings planned there. Wolf Point West exemplifies how big projects can incorporate amenities for people, plants, and animals: open green space at its base allows full public access to the water from Orleans Street in the east, up to Kinzie Street in the north, while its raised riverwalk preserves and enhances the vegetated river bank. Additionally, runoff from the building and the plaza is detained to reduce flooding during a large rain event. The river walk also includes infiltration beds below the surface that clean stormwater. These, along with other amenities, make it a welcome addition to the growing riverside developments in downtown Chicago.

By truly embracing the Chicago River, Riverline showcases the future of river development as it moves along the South Branch of the Chicago River. Departing from decades of riverfront development in Chicago, Riverline has oriented nearly all significant public and private spaces toward the river. Its design restores a natural riparian edge along the river and incorporates native wetland, prairie, and savannah ecological characteristics into the landscape. These ecologies serve diversify flora and fauna on site while allowing for stormwater filtration and management. Amenities for the public include easy access to river-centric ecosystems; bridges and walkways that allow accessibility to multiple communal spaces; and a wetland that restores the South Bank?of the Chicago River to the untamed environment it once was—a natural home for native flora, fauna and migratory birds.

When scanning the surface of Wescott Park in the Village of Northbrook, near the West Fork of the North Branch, you will find the usual park amenities: swing sets, a jungle gym, a baseball diamond. But below the surface you will find this project’s true marvel: an underground stromwater storage facility capable of holding five million gallons of stormwater, equivalent to more than 11 Olympic-sized swimming pools. Detained stormwater will be filtered and will ultimately result in cleaner discharge to the Chicago River. Meanwhile, this underground system allows the park’s green space above to continue to be enjoyed by nearby residents, students, and the overall public. Additionally, this project features a rain harvesting system that will reuse captured stormwater to water the park. All in all, it demonstrates a creative approach to managing stormwater, reducing combined sewer overflows, and creating public amenities for the surrounding community.

The Calumet and southeast Chicago lakefront region spans 900 square miles of the Calumet river system, and has been hydrologically connected to the Chicago River via the Cal-Sag Channel since 1922. It is home to environmental treasures, industrial sites, struggling urban areas, small towns, and new suburbs. Celebrating the rich history and the natural resources of the area, and making connections across communities, the Calumet & Southeast Chicago Lakefront Region Wayfinding Concept brings people together, and brings people to nature. By turning attention to the interrelationships between a healthy economy, our communities, and the natural ecology of this region, this plan creates a thriving river community that is inviting for people, plants, and animals.

In order to address excessive flooding in the Calumet area, the Center for Neighborhood Technology (CNT) has embarked in a long-term planning study to assist homeowners and ease wastewater that ends up in the river. Through their Calumet Corridor RainReady Plan, CNT conducted extensive public outreach and engaged a wide variety of stakeholders and experts in engineering, stormwater management, ecological restoration, and other fields. CNT’s work exemplifies public involvement, and puts together forward-thinking strategies for community-wide flood reduction, which will reduce basement backups and combined sewer overflows. Ultimately, the work from the Calumet Corridor RainReady Plan has established a distinct path forward in each town to reduce systemic flooding issues while creating more beautiful, economically vibrant communities.