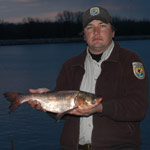 "In this case, endlessly delaying a decision is the same as making the decision to do nothing," said Margaret Frisbie, Friends' executive director. "It is a developing tragedy to allow the White House to prevent any effort to stop these fish from reaching the Chicago River system and the Great Lakes – not to mention squandering the tens of millions of dollars of tax dollars invested over many years to get us to this point."

One fish is not indicative of a healthy, sustainable, reproducing population – but its presence has to be taken into account as we develop ongoing strategies to address the transfer of aquatic invasive species. This is exactly the information that could be in the report on the Brandon Road Lock and Dam, but we won’t know unless the report is released. Of note:

The last carp found was in Lake Calumet on the Lake Michigan side of the lock in 2010. There have been carp found in Lake Erie

That means we have to be careful not to have a knee-ker response the way that it happened in 2009 and 2010 but we need that Army Corps report released.

The photograph shows a big head carp from the Illinois River in 2009. Courtesy Illinois Department of Natural Resources.