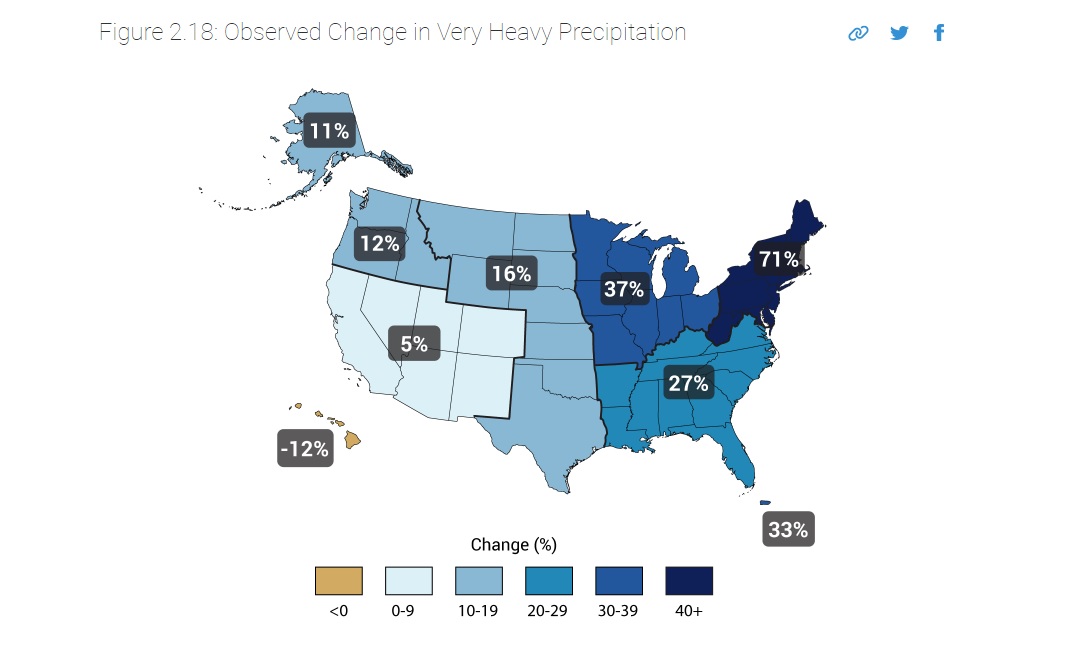 The map shows percent increases in the amount of precipitation falling in very heavy events (defined as the heaviest 1% of all daily events) from 1958 to 2012 for each region of the continental United States.
November 28, 2018

The newly released federal National Climate Assessment includes aspects of global warming of particular interest to those who care about the Chicago River system. The 1,656-page, science-based study includes a focus on the Midwest, which will likely experience, among other environmental stresses, more instances of heavy downpours.

"Extreme rain can result in the release of raw sewage into rivers and streams, posing both health and ecological risks," notes the report. "The U.S. Environmental Protection Agency estimates that the cost of adapting urban storm water systems to handle more intense and frequent storms in the Midwest could exceed $480 million per year (in 2015 dollars) by the end of the century."

Become a Friends of the Chicago River Member

These Combined Sewage Overflows already affect the Chicago River. During heavy rain events, an untreated combination of sewage and stormwater is released into the waterway as the sewage system becomes overwhelmed. The Metropolitan Water Reclamation District's Tunnel and Reservoir Plan (Deep Tunnel) has dramatically reduced the number of CSOs but has not eliminated them. Heavy rainfall this spring and summer resulted in more than a dozen CSOs in the Chicago River system.

Limiting these releases of untreated water is the focus of Friends of the Chicago River's Overflow Action Days (#OverflowAction) effort. At bit.ly/OverflowActionChicago you'll find ways to reduce the chances of combined sewer overflows, such as delaying laundry before and during storms, removing downspouts from storm sewers, and adding natural, rain-absorbing landscaping. You can also sign up for alerts when conditions are conducive to CSOs.

Of course, those steps will not be adequate to combat what is in store for the planet. The New York Times' "Five Big Ways the United States Will Need to Adapt to Climate Change" includes some natural components such as planting more trees, rehabilitating degraded wetlands, protecting pollinators, and restoring rivers to their more natural state to improve water flow--all tasks that Friends of the Chicago River are currently working on. The federal report cites the Cermak/Blue Island Sustainable Streetscape Project in the Pilsen neighborhood that uses bioswales, rain gardens, and permeable pavements to reduce up to 80 percent of stormwater runoff.

Accepting climate change and the fact that human activity strongly influences global warming is a start. Knowing as much about it as you can is another.

The report, the product of more than 300 scientists, is written in a layman-friendly, easy-to-understand way available here. A chapter devoted to Midwest impacts is here.

The links below will also help you understand what's at stake.

Chicago Tribune: “It shows we can’t waste any more time.”

Openlands: Unpacking the National Climate Assessment and what we can do about it here in the Chicago Region

PBS: Great Lakes in the Bullseye of Climate Change