Our relationship with plastic is a complicated one.

"We're sitting on it right now. Our clothing has it in it. Plastic makes our lives easier. And it's cheap," said Jaclyn Wegner, the Shedd's director of conservation action. But, she added, "It's a detriment to our environment."

Wegner was the third speaker in our series of Monday lunchtime talks at the McCormick Bridgehouse & Chicago River Museum. Appearing on July 23, Wegner spoke about single-use plastics and how they can harm nature.

Here are three things from her talk:

1. The most common litter found on Great Lakes beaches? Cigarette filters. (Filters are made from a plastic called cellulose acetate, a compound that eventually breaks down but never disappears, says the Sierra Club. Fish and other marine creatures ingest the tiny pieces. Bits of butts have been found in Artic Sea ice.)

2. Some winter coats and fleece jackets and sweaters lose microplastic fibers during washings and can end up in waterways. (Patagonia makes a washing bag called a Guppy Friend designed to capture the microfibers. The bags have resulted "in a significant reduction in microfiber mass making its way into the wastewater stream," the company says.)

3. A wrinkle has emerged in the effort to get rid of plastic straws: Some people with disabilities say they need them to eat and drink. Shedd has been working with groups to address that problem and recommends that restaurants keep straws on site for use by people who need them to drink or eat. Wegner handed out straws made of bamboo Shedd distributes as part of its Shedd the Straw campaign. 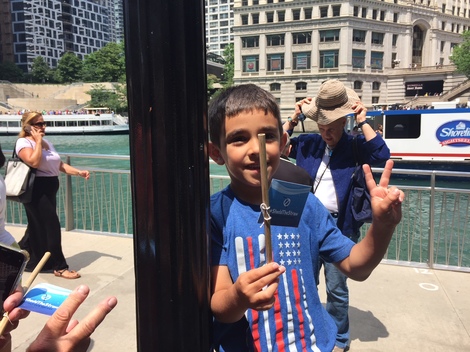 Join us Mondays on the Riverwalk near Michigan Avenue and Wacker Drive for more fascinating guests: