Sun-Times Op-Ed: What Friends Of Chicago River Want From Next MWRD Executive Director 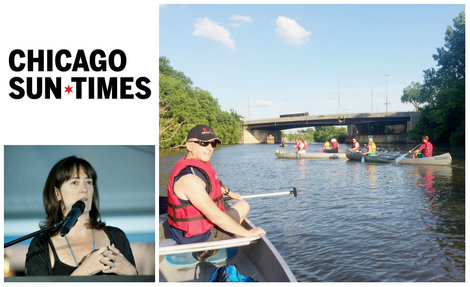 Once our region’s most neglected natural resource, the 156-mile Chicago River system today is teaming with life.

This once-woebegone waterway, for too long derided and dismissed as a dirty ditch, is now home to a vast array of wildlife including beavers, muskrats, turtles, herons and more than 70 species of fish.

This wild turnaround is directly connected to the hundreds of millions of dollars that have been invested in clean water technology and the Tunnel and Reservoir Plan (aka, Deep Tunnel, or TARP). Both projects were pioneered by the Metropolitan Water Reclamation District of Greater Chicago (MWRD) and have made the river hospitable to wildlife and our community, too.

On and along the river, people are walking, riding, hiking, biking, dining, living, working and fishing — just as Chicago Mayor Richard J. Daley predicted way back in 1976. The Chicago River system has become the anchor of a booming waterfront economy.

This progress, which is the effort of decades, has transformed the system into a treasured resource, yet there are a host of issues that still need to be addressed — and Friends of the Chicago River calls upon all of our elected officials to do just that.

Recent developments at the MWRD, including the resignation of David St. Pierre as executive director after seven years, make this a moment to reflect on the river and the goals set forth by the Clean Water Act for all the waters of the United States to be “fishable” and “swimmable.” That means clean enough for people to swim and healthy enough for fish to reproduce.

The MWRD has enormous power and influence to ensure that we meet these goals. 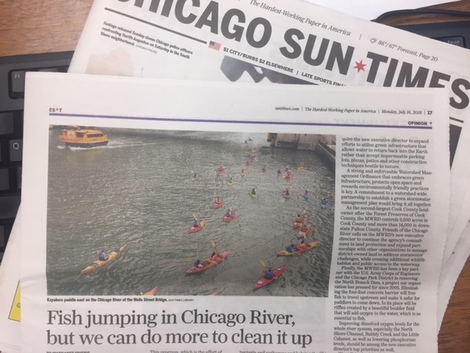 In 2011, the MWRD approved a resolution in support of a new water quality standard that required cleaning up its effluent, the byproduct of sewage treatment that is released into the river. As a result today, disinfection occurs at the Calumet and O’Brien water reclamation plants, removing harmful bacteria and pathogens and helping the Chicago River system move toward its legally-mandated requirement of being swimmable. Ambient water quality is dramatically cleaner downstream of those plants.

Now it is time for the MWRD to install disinfection technologies at its Stickney plant, the largest treatment plant in the world, and open up the river for recreation for its downstream neighbors on Chicago’s Southwest Side, in Summit, Willow Springs and beyond. The new executive director will need to be onboard.

This spring’s record rainfall called to attention another issue that must be addressed. Combined sewer overflows (CSOs), which occur when the TARP system is at its limit, release untreated sewage directly into the waterway. In June alone, we saw more than a dozen discharges into the Chicago River system.

To stop CSOs, we need to complete the last TARP reservoir and prevent rainwater from overwhelming the system. That will require the new executive director to expand efforts to utilize green infrastructure that allows water to return back into the Earth rather than accept impermeable parking lots, plazas, patios and other construction techniques hostile to nature.

A strong and enforceable Watershed Management Ordinance that embraces green infrastructure, protects open space and rewards environmentally friendly practices is key. A commitment to a watershed-wide partnership to establish a green stormwater management plan would bring it all together.

As the second largest Cook County landowner after the Forest Preserves of Cook County, the MWRD controls 9,500 acres in Cook County and more than 14,000 in downstate Fulton County. Friends of the Chicago River calls on the MWRD’s new executive director to continue the agency’s commitment to land protection and expand partnerships with other organizations to manage district-owned land to address stormwater challenges, while creating additional wildlife habitat and public access to the waterway.

Finally, the MWRD has been a key partner with the U.S. Army Corps of Engineers and the Chicago Park District in removing the North Branch Dam, a project our organization has pressed for since 2005. Eliminating the four-foot concrete barrier will free fish to travel upstream and make it safer for paddlers to come down. In its place will be riffles created by a beautiful  boulder field that will add oxygen to the water which is so essential to fish.

Improving dissolved oxygen levels for the whole river system, especially the North Shore Channel, Bubbly Creek and the Little Calumet, as well as lowering phosphorous levels, should be among the new executive director’s top priorities as well.

We at Friends of the Chicago River have partnered with the MWRD on a host of environmental initiatives to improve the Chicago River system and commend them for their contributions in making the river a place where we can go to live, work and play. In a few weeks, we will join MWRD commissioners as well as federal, state and city officials in our second Big Jump swimming event on the South Branch. It will be a public demonstration of our commitment to swimming and to celebrate how the river system has become an essential part of the Chicago area’s natural, recreational, and economical spirit.

As the MWRD’s board of commissioners seeks the agency’s next executive director, we ask them to consider the meaning of the Big Jump, how much progress we’ve made toward a fishable and swimmable Chicago River, and to hire a new executive director who can get job done.

Margaret Frisbie is executive director of Friends of the Chicago River.