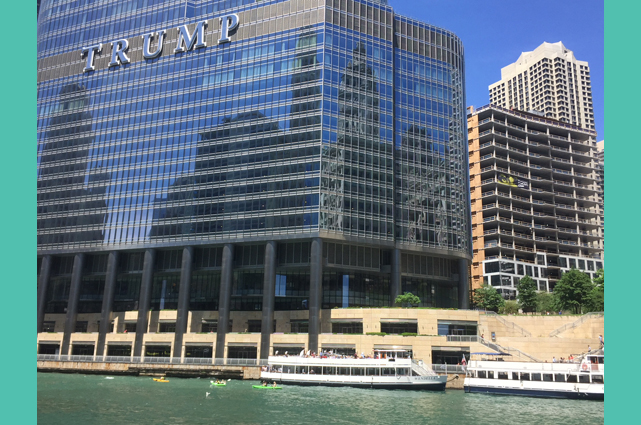 Friends of the Chicago River and the Sierra Club of Illinois issued this press release on Monday, August 2o, 2018

On Monday, August 20, 2018, Friends of the Chicago River and the Sierra Club filed a motion in Cook County Circuit Court to intervene in a lawsuit against the Trump International Hotel & Tower in Chicago.

The lawsuit stems from permit violations by the Trump Tower which uses 19.7 million gallons of Chicago River water a day for cooling. The Tower has ignored federal and state laws and regulations that require buildings, especially new ones, to minimize damage to fish and other aquatic life from water intake structures and to implement protective measures.

Illinois Attorney General Lisa Madigan filed suit August 13, 2018. Earlier on June 15, 2018, the Illinois Chapter of the Sierra Club and Friends of the Chicago River had provided notice of their intent to sue the Chicago Trump International Hotel and Tower over its continuing violation of the Clean Water Act based on their investigation.

Regarding the request to intervene in the state lawsuit, Friends of the Chicago River Executive Director Margaret Frisbie issued this statement: “Friends of the Chicago River is eager to join forces with the Attorney General to assure the law is enforced and the river is protected. We have worked for decades to improve the health of the river and help transform it into a natural, recreational, and economic asset for the region. We want to protect those investments, the health of the river, and the wildlife that depends upon it.”

Jack Darin, Sierra Club Illinois Chapter Director, said: "Over and over we've heard Donald Trump say ‘we want crystal-clean water, and we want clean air -- the cleanest ever’ but his actions say otherwise. For years, Trump's tower on the Chicago River has been violating the Clean Water Act. It's disappointing that the Rauner administration turned a blind eye to these violations for years, but we are now hopeful that they will be prosecuted to the fullest extent of the law. We will work with the Attorney General to ensure that justice is served and the Chicago River is fully protected."

Friends of the Chicago River and Illinois Chapter of the Sierra Club are represented by Attorney Albert Ettinger and the Abrams Environmental Law Clinic.

Federal law mandates that Trump Tower do extensive studies of Chicago River fish populations and the impact of the building’s water intake system. Trump Tower failed to file any study results to the Illinois Environmental Protection Agency, Illinois Attorney General Madigan said. Such cooling water intake structures can pull large amounts of fish into building cooling systems. Fish and other aquatic life can also get trapped against intake screens. The suit filed by Madigan alleges that Trump Tower dumps millions of gallons of heated water daily into the Chicago River without a valid permit.

Frisbie noted that her organization, in partnership with the Illinois Department of Natural Resources, has spent nearly $1 million on fish habitat projects in the last five years including along the Main Stem of the Chicago River. Since 2014 they’ve released 277,000 Illinois native channel catfish and 8,000 Illinois native northern pike into the Chicago River system at a cost of $484,000.

Friends of the Chicago River is the only organization solely dedicated to the Chicago River. Since 1979, Friends has been working to improve the health of the Chicago River system for the benefit of people, plants and animals; and by doing so, has laid the foundation for the river to be a beautiful, continuous, and easily accessible corridor of open space in the Chicago region. For more information, visit www.chicagoriver.

About the Sierra Club

The Sierra Club is America’s largest and most influential grassroots environmental organization, with more than 3 million members and supporters. In addition to helping people from all backgrounds explore nature and our outdoor heritage, the Sierra Club works to promote clean energy, safeguard the health of our communities, protect wildlife, and preserve our remaining wild places through grassroots activism, public education, lobbying, and legal action. For more information, visit www.illinois.sierraclub.org.

The Abrams Environmental Law Clinic works to solve some of our region’s and country’s most pressing environmental problems. On behalf of clients, the Clinic challenges those who pollute illegally, fights for stricter permits, advocates for changes to regulations and laws, holds environmental agencies accountable, and develops innovative approaches for improving the environment.  For more information, visit https://www.law.uchicago.edu/clinic