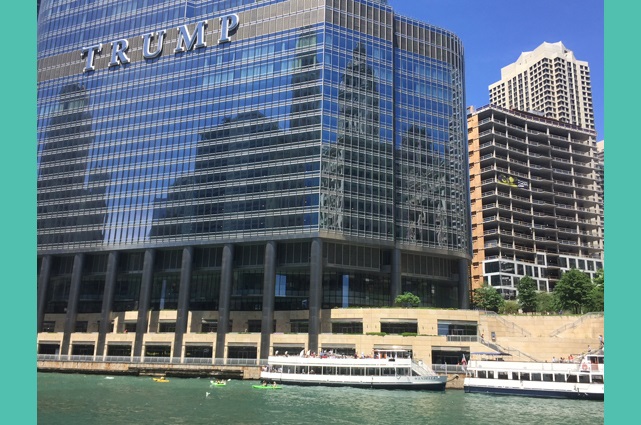 The Illinois Chapter of the Sierra Club and Friends of the Chicago River have provided notice of their intent to sue the Chicago Trump International Hotel & Tower over its continuing violation of the Clean Water Act. It appears that Trump Tower in Chicago has not fulfilled several legal requirements of the Clean Water Act over the past four years.

These violations include Trump Tower’s ongoing illegal operation of a cooling water intake structure that siphons water from the Chicago River and likely traps and kills fish and other wildlife in this increasingly ecologically and recreationally vibrant waterway. Federal and state law and regulations require newly constructed facilities like the Trump Tower to study how to minimize damage to aquatic life from their water intake structures and to implement protective measures.

"Donald Trump has repeatedly said ‘we want crystal-clean water, and we want clean air -- the cleanest ever’ but his hotel has been negatively impacting the Chicago River for years,” says Jack Darin, Sierra Club Illinois Chapter Director.  “Actions speak louder than words, and it’s clear Trump will use any means necessary -- from actively threatening our city’s namesake river for his own profit to rolling back clean air and water safeguards as President -- to show his disregard for our clean air and water. Donald Trump outright disrespects Chicago any chance he gets, including thinking he is above following the laws protecting our hometown Chicago River.”

“These fish, and the multitudes of fish already in the river, are intended to take advantage of our public investment in cleaner water and improved habitat. Allowing the Trump International Hotel and Tower to continue to operate a system that traps and kills fish and other aquatic wildlife flies in the face of the momentum and investment surrounding a vibrant, healthy, revitalized Chicago River,” Frisbie said. “We can’t allow such an egregious violation of state and federal water law to go unchecked.”

“The population of fish in the river today, in numbers and species diversity, is better than it has been in many decades. As a city and a region we have invested in parks, open spaces, and venues like the Riverwalk that are banking on the continued improvement of the River, for the benefit of fish and people,” Frisbie said.

The Clean Water Act allows citizens and citizen groups to sue those who violate the Act. The Act requires citizens to provide a 60-day advanced notice to the polluter and the government before citizens can file their suit. Citizens can seek remedies such as monetary penalties and an injunction that requires the company to stop polluting and to change the practices that have led to the illegal discharges.

The Sierra Club and Friends of the Chicago River are taking action now because federal and state regulators have not pursued legal action against Trump Tower, despite a 2013 settlement with the Illinois Attorney General’s Office in which Trump Tower agreed to undertake the studies and to implement the protective measures required by federal and state law and regulations.

The Sierra Club and Friends of the Chicago River are represented in this action by Albert Ettinger, as well as the Abrams Environmental Law Clinic at the University of Chicago Law School .

Related: What Kind of Fish Live In The Chicago River?

About the Sierra Club

The Sierra Club is America’s largest and most influential grassroots environmental organization, with more than 3 million members and supporters. In addition to helping people from all backgrounds explore nature and our outdoor heritage, the Sierra Club works to promote clean energy, safeguard the health of our communities, protect wildlife, and preserve our remaining wild places through grassroots activism, public education, lobbying, and legal action. For more information, visit www.sierraclub.org.

Since 1979, Friends has been working to improve the health of the Chicago River system for the benefit of people, plants and animals; and by doing so, has laid the foundation for the river to be a beautiful, continuous, and easily accessible corridor of open space in the Chicago region. For more information, visit www.chicagoriver.org.

The Abrams Environmental Law Clinic works to solve some of our region’s and country’s most pressing environmental problems. On behalf of clients, the Clinic challenges those who pollute illegally, fights for stricter permits, advocates for changes to regulations and laws, holds environmental agencies accountable, and develops innovative approaches for improving the environment.  For more information, visit https://www.law.uchicago.edu/clinics/environmental.