Friends Anniversary: Bringing the River to Life for 40 Years

Yes, that logo in the bottom right-hand corner of the photo above marks our 40th anniversary! In 1979, Friends of the Chicago River was launched by a small group of concerned folks, inspired by journalist Robert Cassidy's Chicago magazine cover story "Our Friendless River."

In 2019, four decades later, we have thousands of Friends like you who support this tireless effort to improve and protect the Chicago River system for people, plants and animals. To represent us this year, we chose the dragonfly: agile and efficient with amazing vision and focus. Dragonflies are key indicators of ecological quality as they need clean water to survive. And, in some cultures, they represent change. 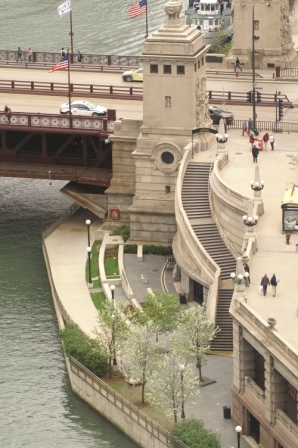 Friends has had an amazing history and we'll be telling that story throughout the year through our annual events such as Chicago River Day, our Chicago River Schools Network's Student Congress, and the Chicago River Summit. We've been working on a number of special projects, too, including a comprehensive assessment of public land use along the river, an economic report on the value of our great waterway, and a blueprint for trail building. We'll be recognizing the 40 key moments in the history of Friends, the people who made it all happen, and the accomplishments of what four decades of dedication can produce. We're looking forward to August, when a special celebration will be held at our newly refreshed McCormick Bridgehouse & Chicago River Museum at Michigan Avenue and Wacker Drive.

Friends had a productive 2018. Our legal action against the Trump International Hotel and Tower Chicago gained worldwide attention, we worked diligently with private and public officials to ensure environmentally sensitive development and public access along the river, our Chicago River Day attracted some 2,000 volunteers at 70 cleanup sites across the region, and our museum welcomed its 200,000th guest.

Our anniversary year of 2019 promises even more. We hope you'll join us.

Friends of the Chicago River: Bringing the River to Life for 40 Years.