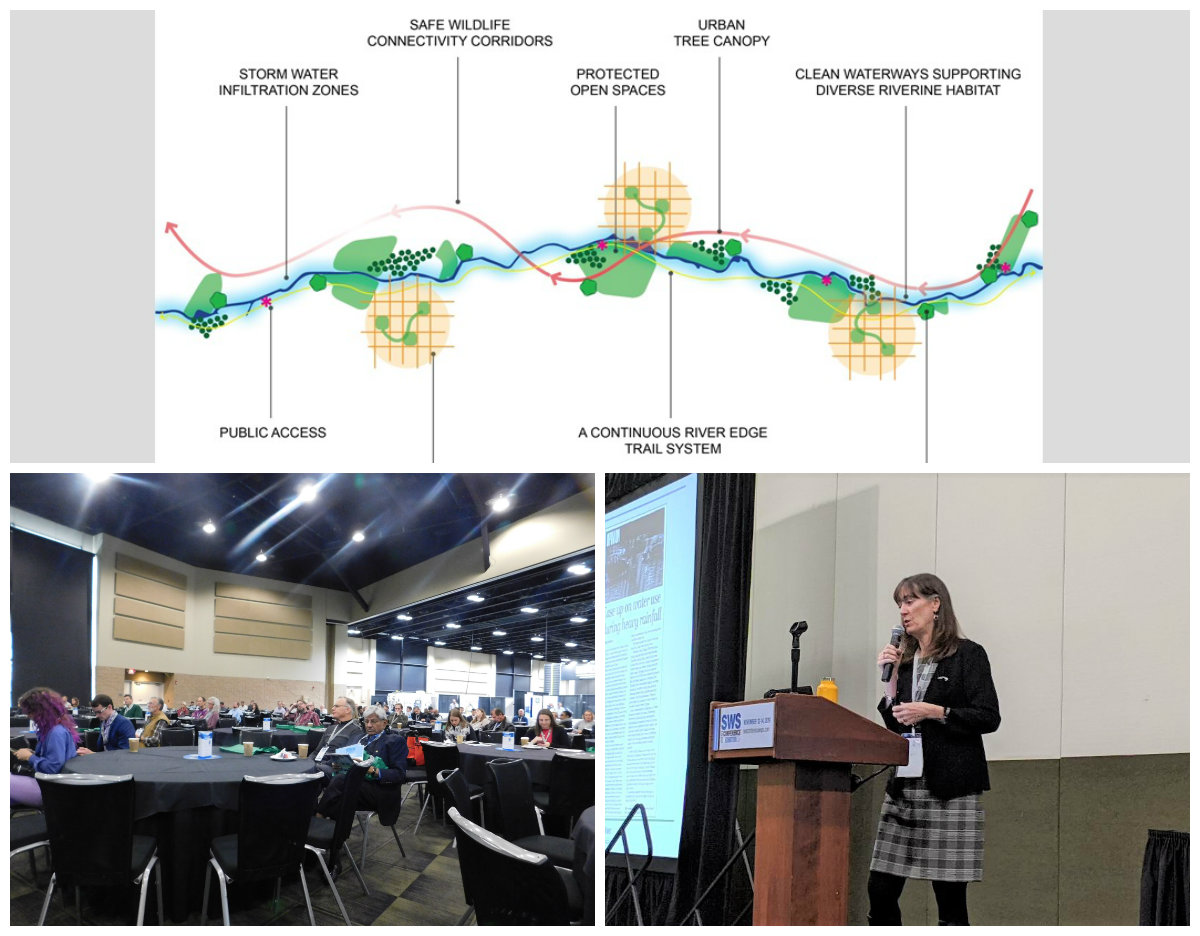 The value of a blue/green corridor design approach to the Chicago River system and others like it can be measured not only in aesthetics and health benefits for people and wildlife but economically as well, Friends of the Chicago River Executive Director Margaret Frisbie told a gathering of government and private industry stormwater experts.

Serving as the keynote speaker at the Storm Water Solutions Conference in Tinley Park on November 13, Frisbie explained that the blue/green corridor approach is a sustainable design solution that uses a river and adjacent lands to establish an interconnected passageway between large-scale natural habitats. Such corridors provide people with a place to play, allow for natural movement of wildlife, and create stormwater-absorbing open space.

"Developing the Chicago River system as a blue/green corridor would have a direct impact on human health and well-being," she said, noting studies have shown that access to nature can help lower blood pressure, reduce stress, increase energy levels, and boost immune systems. Some children with ADHD saw increases in their ability to focus after exposure to outdoor activities, researchers say.

Additionally, Frisbie said, such an approach "can help us combat and withstand the climate crisis by tempering extreme heat and defending against intensifying storms."

However, she noted, "In the advocacy world, it isn't always good enough to say that clean air, clean water, and a healthy landscape are of value in their own right. Sometimes you have to prove it."

Frisbie cited a Friends-commissioned study that concluded that developing the Chicago River system as a blue/green corridor would pay off economically, as well. Researchers from the University of Wisconsin-Whitewater's Fiscal and Economic Research Center concluded that every $1 spent on developing blue/green corridor projects would provide $1.77 in additional economic return. Regionally, increased property values would have an impact of $192 million in annual benefits over a 15-year time span and support more than 1,600 jobs.

"We are asking people like you to work with us and take people, water, and wildlife into your planning along the river and elsewhere to protect and connect our land and water resources together," Frisbie told the professionals. "Believe in the blue/green corridor solution."

Below are some of the slides from Frisbie's speech illustrating the many benefits of a blue/green corridor approach. 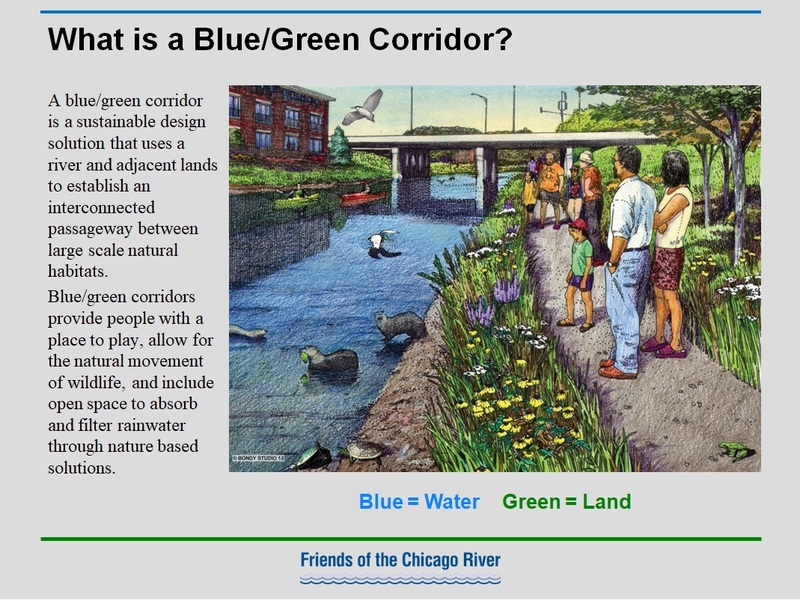 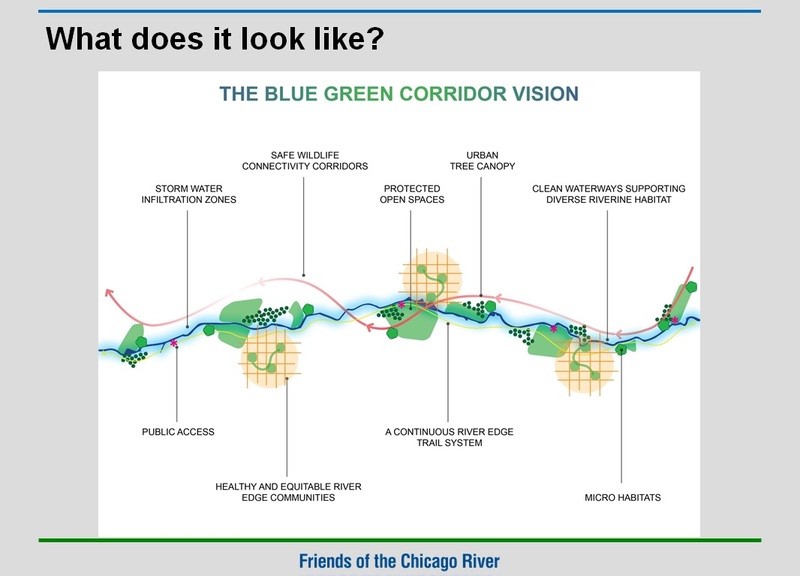 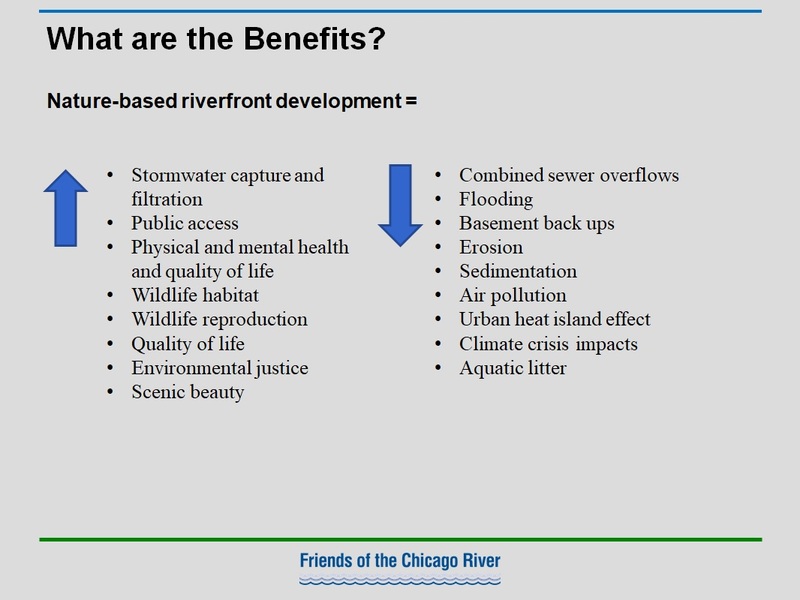 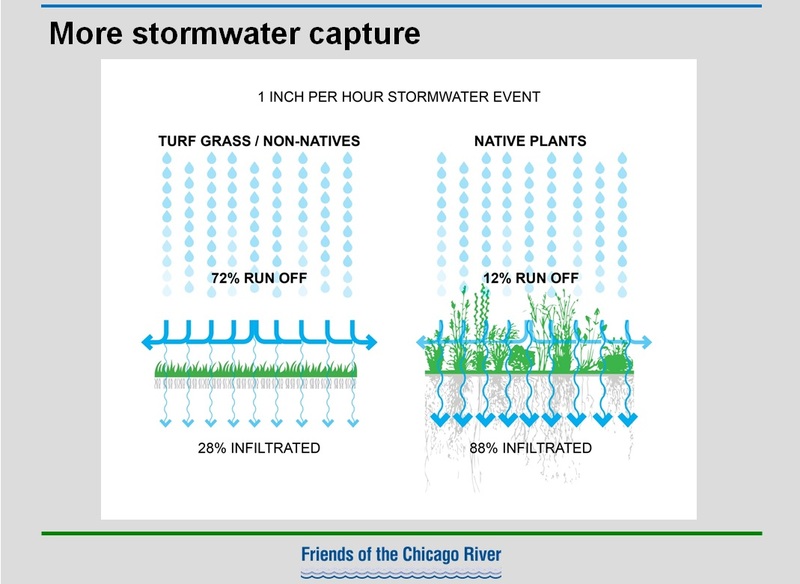