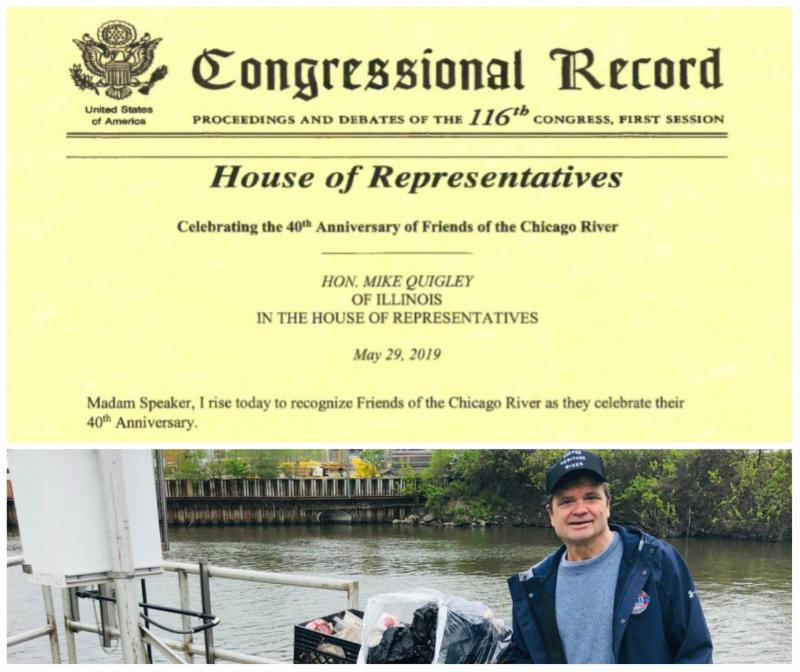 In a statement introduced in the U.S. House of Representatives and now included in the Congressional Record, Rep. Mike Quigley (D-Ill.) cites Friends' successes in the areas of policy, on-the-ground-projects, our education efforts through the Chicago River Schools Network, and volunteer work. "Friends has educated more than 400,000 students about science, nature and the environment; received over 200,000 visitors to its McCormick Bridgehouse & Chicago River Museum and have taken over 20,000 individuals canoeing to build new and future advocates" for the Chicago River system, he said.

"Friends has grown from a handful of people concerned about the neglects of the river system to an organization of 10,000 members, volunteers, and online advocates led by Executive Director Margaret Frisbie and Board President Sally Fletcher," Quigley continued. "Generations of Chicagoans now value the Chicago River system as an invaluable natural resource."

Quigley is a longtime supporter of Friends and a frequent participant in our Chicago River Day cleanup effort, including serving as a site captain for many years. He has been a speaker at Friends' annual Chicago River Summit and took part in our inaugural Big Jump! swimming event in 2017. In Washington, D.C. and as a member of the Cook County Board, he has championed environmental issues and advocated for higher water quality standards.

Friends began in 1979 when freelance journalist and urban planner Robert Cassidy penned “Our Friendless River” for Chicago magazine after paddling the river from Winnetka to the Chicago locks with conservation and paddling legend Ralph Frese. Cassidy detailed the degraded state of the waterway but also extolled its potential.

Read more about the amazing history of Friends of the Chicago River here.