Friends' efforts to improve the reproductive success of osprey took flight in August when it was discovered that two chicks, born in June to the pair of osprey who nested for the first time on our nesting platform at the Beaubien Woods Boat Launch, had successfully fledged - a wonderful success story of Friends' Wildlife Habitat Projects.

You can help us continue this important wildlife habitat work by symbolically adopting an osprey, one of the many wildlife species that Friends has been working to assist in and along the Chicago River system. Six different adoption packages are available. A donation includes a 12-month membership along with discounts on canoe trips, free membership in the McCormick Bridgehouse & Chicago River Museum, and tickets to our other special events. By symbolically adopting an osprey for a full year for yourself or as a gift, you will support Friends' Wildlife Habitat Projects. You will also advocate for clean water and healthy habitat that improves the river system for the more than 70 species of fish, countless species of birds, beavers, muskrats, turtles, and the even the occasional river otter that call it home. 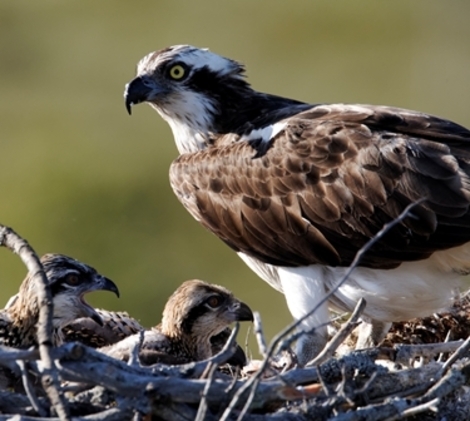 Osprey are a conservation success nationally, yet are still endangered in Illinois. Osprey populations plummeted across the U.S. in the 1950s and 1960s due to the use of toxic pesticides such as DDT. Osprey populations recovered significantly after DDT was banned. However, in the Chicago region, the osprey's success is limited by a lack of available habitat. Since 2014, Friends has been working with the Forest Preserves of Cook County to increase the number of nesting sites available to osprey along the river system, north and south, and the results are impressive.

Since 2015, Friends has installed five osprey nesting platforms along the river system. The five platforms - which sit on top of 80-foot poles - provide easy access to fish and allow a 360° view, which osprey prefer to protect their young chicks from predators such as the bald eagle.

If you adopt osprey or channel catfish will get a "static cling" sticker to proudly place on your car or window.