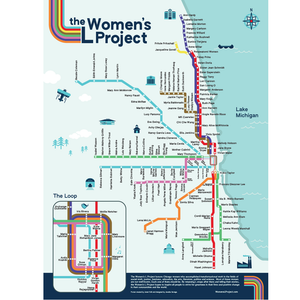 The Women’s L Project honors women of Chicago – past and present – whose life-changing work makes strong contributions to the city, to society, and to world. The project (symbolically) renames L stops after amazing Chicago women in the fields of social work, justice, the arts, writing, politics, and science. We are thrilled to see the project name the Brown Line’s Francisco Station in the Ravenswood Manor neighborhood for Friends’ Executive Director Margaret Frisbie.

By renaming L stops after these women, the Women’s L Project “hopes to inspire people to strive for greatness in their lives and positive change in their communities and the world.”

Profiled In the Chicago Tribune

“I am humbled and inspired to be included in the company of extraordinary women who make Chicago, and the world, a better place,” said Frisbie. “While the honor is in my name, it is truly an honor bestowed on Friends of the Chicago River and all our volunteers, supporters, and staff whose talents and tireless efforts improve and protect the river system.”

A poster featuring every L stop named for a notable Chicago woman is available for purchase on their website.