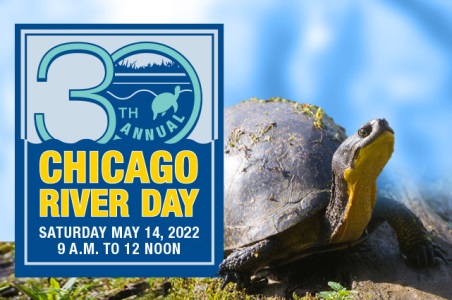 Join us May 14 for the 30th annual Chicago River Day. The spring litter cleanup and restoration event draws thousands of volunteers every year to work in and along the river system at nearly 70 locations throughout the watershed – from Lake County to the Calumet region and southwest to Summit, Palos and beyond. The three-hour litter cleanup event kicks off at 9 a.m., and runs to 12 noon.

This volunteer-driven event that began in 1992 as Chicago River Rescue Day – reflecting the more dire environmental state of the river 30 years ago – has steadily grown into the Friends’ largest and most popular volunteer event of the year. Since 1992 volunteers have removed an epic 1.9 million pounds of litter and invasive plant material from the river and its banks.

Rescue was dropped from the event’s name in 2004, underscoring the river’s improved health and the increased recognition of this valuable natural asset. The Chicago River system has made a strong comeback due to action and advocacy on its behalf; the results are smarter policy decisions for the implementation of water quality standards, disinfection to protect recreational users, more open public space, and wildlife restoration.

“When Chicago River Day began 30 years ago, fishing, paddling, and accessible open space on the Chicago River system were novel ideas, and swimming was unthinkable,” said Margaret Frisbie, executive director of Fiends of the Chicago River. “Now the Chicago River system is healthier than it has been in 150 years and it is alive with people and wildlife. There is more work to do to address the continued impacts of sewage and stormwater pollution, and the climate crisis, but people are awakening to an understating of the river as a valuable natural resource and are springing into action to improve and protect it.”

While the overall health of the Chicago River system is greatly improving, litter remains a harmful and stubborn problem. For the past 30 years, volunteers have carted nearly 2 million pounds of garbage from the 156-mile Chicago River system, restoring riverbanks and open spaces for a Litter Free Chicago-Calumet river system.

Each year Friends features a river animal as part of Chicago River Day to help connect us to the many different animals that rely on us to care for and protect the river system. To illustrate the interconnectedness of the land and water, this year's featured animal is the Blanding’s Turtle (Emydoidea blandingii).