Study Shows Advocating for the River System is Paying Off 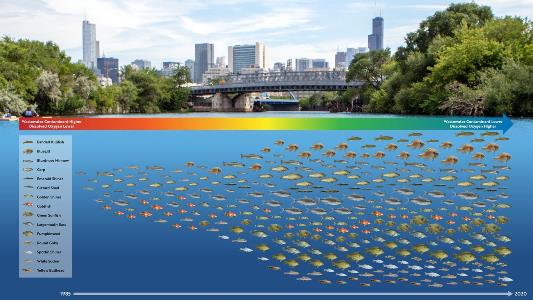 Decades of work to reduce sewage and stormwater pollution in the Chicago River system is directly linked to the dramatic increase of fish species – especially native species – according to a study by our partners at the Shedd Aquarium. However, more work needs to be done to sustain and accelerate health improvements from threats posed by rising chloride (salt) levels and the climate crisis.

In a WTTW Chicago story this week about the study, Friends’ Executive Margaret Frisbie said the dramatic turnaround in the health of the river system is due to years of advocacy for the implementation of water quality standards, disinfection to protect recreational users, more open space, and wildlife habitat restoration.  She also notes a shift in the organizational mindset of public agencies, such as the Metropolitan Water Reclamation District, to focus on the broader health of the region’s waterways and ecosystems. The WWTW story notes that investments in wastewater treatment and infrastructure make a difference: “MWRD’s Tunnel and Reservoir Plan (TARP, aka, Deep Tunnel), commissioned in the 1970s, is one such investment. As massive reservoirs like Majewski, Thornton, and McCook phase one have come online, MWRD has been able to capture and store stormwater and sewage that would otherwise have overflowed, untreated, from sewers into waterways during major rainstorms and snowmelts.”

To build resiliency and eliminate all sewer overflows into the river, TARP must be augmented by a nature-based green infrastructure system and the continued input of road salt into the Chicago River system is a risk to health improvement gains according to the Shedd’s study. As WWTW’s story reports, “Spread liberally on streets, sidewalks and parking lots, salt eventually is washed away into sewers and carried to treatment plants, which are powerless against it. It is a threat to “Any plant, fish or other aquatic species that didn’t evolve in the presence of salt suffers….”