Go on a Journey of Big Marsh Park and Listen 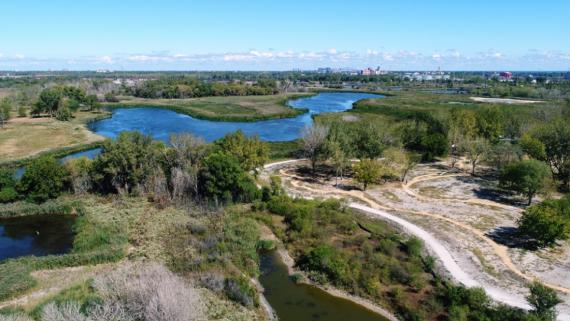 Experience an environmental transformation as we take you on a journey of the Chicago Park District’s largest natural site – Big Marsh Park, this month’s focus for online programming and the 6th episode of Inside, Out & About, our podcast to raise awareness and use of natural areas. Onsite programs are underway at all of the Inside, Out & About locations which include the Chicago Portage National Historic Site, Kickapoo Woods, Bubbly Creek, LaBagh Woods, Beaubien Woods and ,now Big Marsh.

Listen to the New Episode

Once a degraded dumping ground for slag and other industrial waste, Big Marsh Park is a gem of eco-restoration with world-class bike tracks, beautiful multi-use trails, and restored hemi-marsh habitat. Located on the southeast side of Chicago in the area commonly known as the Calumet Area Reserve, the nearly 300-acre site was acquired by the Park District in 2011 and opened as Big Marsh Park in 2016. The site is now the hub of five parks and natural areas on the southeast side, and it is a significant area of biodiversity and migratory birds, especially water-loving secretive marsh birds, like the threatened least bittern, which are more often heard than seen. Later this year the Ford Calumet Environmental Center will also open at Big Marsh featuring classroom spaces open to school and community groups and exhibits depicting the history of southeast side natural areas as well as champions of environmental justice such as Hazel Johnson, the founder of People for Community Recovery.

Online and in-person programming is complemented by Friends’ podcast. Also on this episode you’ll learn about soundwalks from an innovative Chicago artist, Norman W. Long, who uses sound to connect people with their community, history, culture, and ecology; a perfect introduction to soundwalks for World Listening Day on July 18. This year’s World Listening Day theme is “The Unquiet Earth,” an invitation to reflect on and engage with the constant murmur of the Earth.

Hosted by Friends’ Executive Director Margaret Frisbie, this episode includes interviews with Stephen Bell, park supervisor for Big Marsh Park, who discusses the history and restoration efforts at Big Marsh as well as upcoming plans. Chicago sound artist, designer and composer Norman Long, also discusses sound art production using field recording, electro-acoustic composition and dub technique within the larger context of landscape. Watch a video and listen to a soundwalk of Big Mark Park with Long (click here for Part 1 and Part 2). Long is also a board member of the Midwest Society of Acoustic Ecology (MSAE) which is dedicated to exploring the role of sound in natural habitats and human societies. Throughout the summer MSAE is hosting the Sixth Annual Summer Soundwalks in the Parks which includes a Singing Insects Soundwalk at Big Marsh Park on August 11. Long also leads soundwalks with the Park District's Night Out in the Parks.

Previous Inside, Out & About episodes also feature significant sites of the Calumet region, Kickapoo Woods and Beaubien Woods. Other episodes include LaBagh Woods on the city’s Northwest Side, the Chicago Portage National Historic Site, and Bubbly Creek on the South Branch. Hosted by Friends’ Executive Director Margaret Frisbie, episodes include interviews with wildlife scientists, environmental journalists, and Chicago history experts including Liza Lehrer, assistant director, Urban Wildlife Institute; public television writer, producer, and program host Geoffrey Baer; and Elizabeth Kolbert, Pulitzer-prize winning author of The Sixth Extinction: An Unnatural History. Online Inside, Out & About programs are in available in Spanish.