One of Friends’ fundamental goals is to help restore wildlife habitat in and along the Chicago River. Our wildlife projects target species that are at-risk due to habitat degradation and lack of available habitat. Many of our efforts have been voyages of discovery, as only a few government agencies are doing this work on any scale in Illinois. Check out some of our groundbreaking initiatives below. Learn more about Chicago River ecology and wildlife.

To address a lack of high-quality habitat within the Chicago River system, Friends embarked on a two-year project with the Illinois Department of Natural Resources to create and install 400 nesting cavities for channel catfish. This sport fish is a hardy species that is present in the river in lower numbers than we would expect. As a part of the project, Friends released a total of 277,000 juvenile catfish into the river. The multi-species nesting cavities will not only benefit channel cats, but also a host of other species including bass, sunfishes, and macroinvertebrates. Check out a video about the project.

Working with scientists from the Forest Preserves of Cook County, Friends identified bats as water-dependent  species already present in the system whose reproductive success could benefit from help.

Mother bats and their young are particularly at-risk due to lack of available habitat for communal nursery colonies. To date, Friends has installed four maternity colonies to provide additional habitat for these insect-eating species. The colonies are 4’ x 4’ x 4’, large enough to support thousands of mother bats and their young. Six colonies were installed by the end of the project in 2018.

Working with scientists from the Forest Preserves of Cook County, Friends identified ospreys as a water-dependent species already present in the system whose reproductive success could benefit from help.

Osprey populations plummeted across the country in the 1950s and 1960s due to the use of toxic pesticides. Decades after many countries banned chemicals like DDT, many osprey populations have recovered significantly. In the Chicago region, however, the osprey’s success is limited by a lack of available habitat.

Three additional platforms were installed in 2016, and the fifth was installed in early 2018. For more information on one of our 2016 installations, check out the Chicago Botanic Garden's post and the post from Bridgewater Studio, who constructed the nesting platform.

Our first pair of breeding osprey produced two chicks at Beaubien Woods in the spring of 2020.

Working with scientists from the Forest Preserves of Cook County, Friends identified turtles as water-dependent animals already present in the system whose reproductive success could benefit from help.

A lack of available habitat means that many aquatic turtles are confined to nesting in very particular areas. These areas are often well-known to predators, leaving turtle eggs and young hatchlings particularly vulnerable.

Working with restoration companies, Friends cleared 135 acres of nesting habitat in 2015-2019 and is in the process of clearing an addtional 27 acres in 2020.

Since 2005, the Chicago Riverwalk has been an emerging cultural attraction along the downtown Chicago River. The Riverwalk expansion, extending nine additional blocks along the Main Stem, allows people to walk uninterrupted from Lake Michigan to Lake Street. This major construction project provides a unique opportunity to address the lack of habitat in the channelized Main Stem. Inspired by the success of our Fish Hotel project, Friends partnered with the City of Chicago to install fish habitat along one of the new Riverwalk blocks, called “The Jetty.”

The Jetty stretches along the south bank of the river between Wells Street and Franklin Street. A variety of underwater structures complement a series of floating gardens, to provide refuge for fish. One such structure is a series of fish “lunkers.” Lunkers are enclosed spaces that create hiding spaces for smaller fish. Other underwater habitat includes artificial substrates, which will not only provide additional hiding areas for fish, but a surface for algae and plant colonization that will ultimately attract the micro and macroinvertebrates that provide the base of the food chain for many aquatic species. This project was completed in fall 2016. Read more about the unveiling of the Riverwalk's final phase.

Friends’ in-stream planting project launched another partnership with the Illinois Department of Natural Resources and complements our 2014-15 installation of 400 nesting cavities and release of 277,000 channel catfish into the river. The installation of 4,500 aquatic plants in the North Shore Channel in 2017 will provide high-quality habitat for aquatic organisms, protect shoreline from bank erosion, create shelter for aquatic life during floods, and improve the aesthetics of the river for recreational users.

Since 2018 Friends has continued in-stream planting in partnership with the Shedd Aquarium. Work continues along the North Shore Channel and beginning in 2021 plants are also being installed along the Little Calumet River. Check our Events page for summer volunteer opportunities with this ongoing habitat effort. 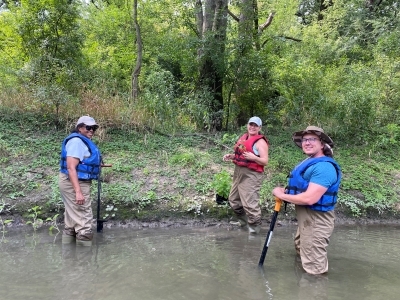