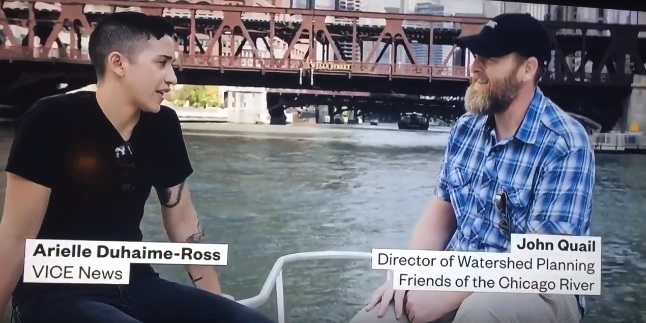 Vice Nightly News, airing on HBO, recently filed a report on our legal action against the Trump International Hotel and Tower in Chicago for violations of the federal Clean Water Act.

These violations include Trump Tower’s ongoing illegal operation of a cooling water intake structure that siphons water from the Chicago River and likely traps and kills fish and other wildlife in this increasingly ecologically and recreationally vibrant waterway. Federal and state law and regulations require newly constructed facilities like the Trump Tower to study how to minimize damage to aquatic life from their water intake structures and to implement protective measures.

Friends, along with the Sierra Club, the University of Chicago's Abrams Envionmental Law Clinic and attorney Albert Ettinger, have joined Illinois Attorney General Lisa Madigan in suing the Trump Organization.

Your Support Helps Our Mission: Become a Friends Member

The report by Vice journalist Ariele Duhaime-Ross and her team features Friends of the Chicago River Director of Watershed Planning John Quail and Mark Templeton of the Abrams law clinic.

ICYMI: The Illinois Attorney General and a number of environmental groups are suing the Trump organization to the tune of $90 million dollars pic.twitter.com/JZBFskYnIv