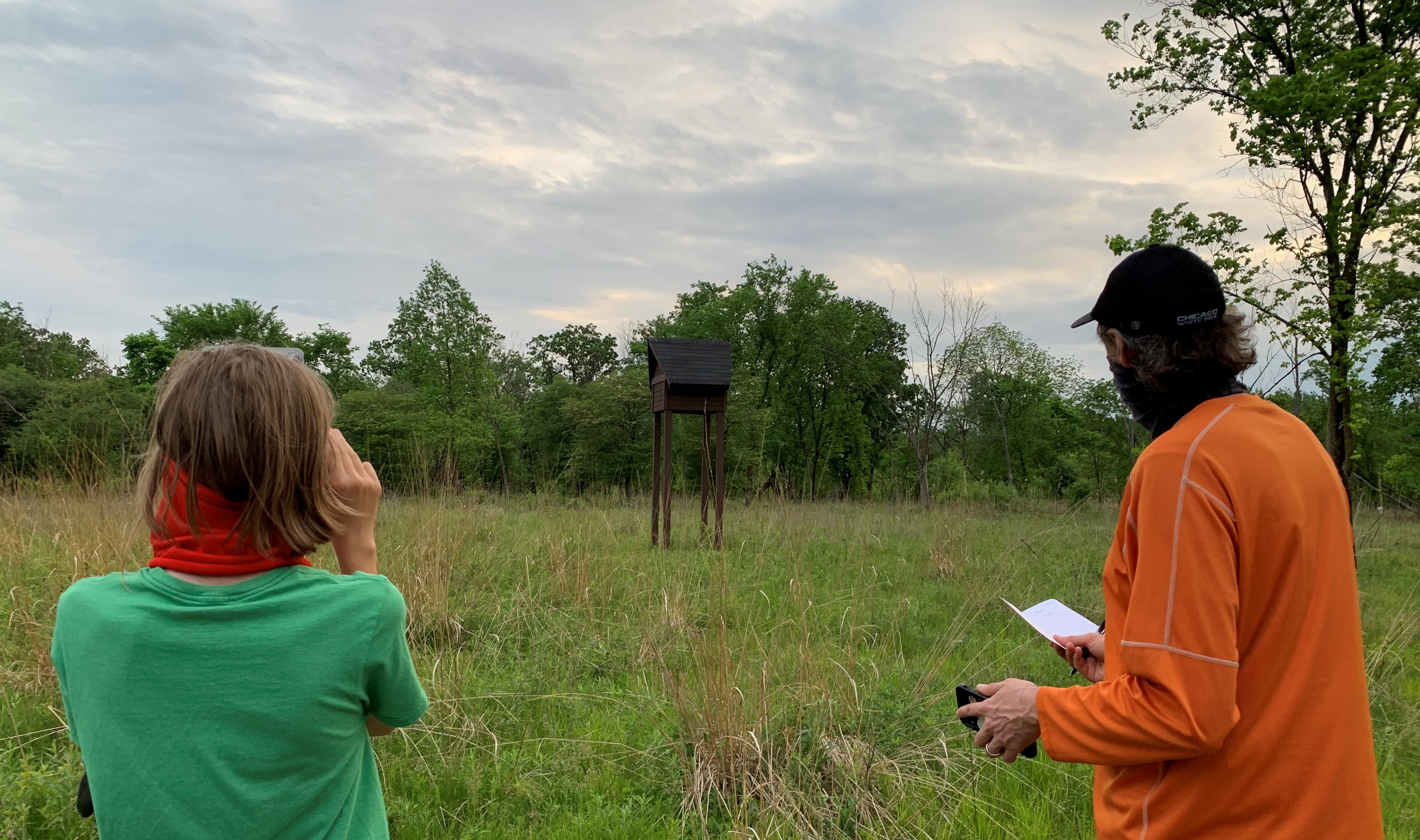 To support our wildlife projects and evaluate their success, Friends trains volunteer wildlife monitors to observe and report on the progress of targeted habitat initiatives.

Friends’ wildlife habitat projects strive to help all animals, but we also work closely with scientists from the Forest Preserves of Cook County to target certain species that are at risk due to habitat degradation and lack of available habitat. Osprey, turtles, and bats were identified as river-dependent species present in the river system whose reproductive success could benefit from our help.

Our trained wildlife monitors play a vital role in helping us manage the success of our efforts over time. In 2021, 13 volunteer monitors spent a nearly 58 hours in the forest preserves monitoring the three targeted species, submitting 71 detailed field reports.

“Volunteer wildlife monitors are essential in helping us make good, informed decisions about the progress of our wildlife work,” said Margaret Frisbie, Friends’ executive director. “They are our eyes and ears, spending hours and hours detailing their findings at key river-system sites. We can’t thank them enough.”

Osprey: Five volunteers monitored osprey poles and platforms at four sites: Skokie Lagoons, Erickson Woods, Whistler Woods, and Beaubien Woods. Among the observations of the monitors was an osprey pair who returned this year to Beaubien Woods, however there was a nest failure due to inclement weather. Osprey were also seen in the vicinity of the pole at Whistler Woods.

A threatened species in Illinois, osprey are making a comeback. Friends has been working the Forest Preserves of Cook County to increase the number of nesting sites available to osprey along the river system, installing five osprey nesting platforms along the river system since 2015. See video of an osprey pole being installed. Learn more about osprey on our Inside, Out & About podcast featuring Beaubien Woods which includes an interview about osprey with Chris Anchor, a biologist with the Forest Preserves of Cook County.

Since 2015, Friends has worked with our partners on turtle habitat restoration including removing invasive plant species such as buckthorn. You can virtually adopt a baby turtle here.

Bats: Six volunteers monitored for any activity at bat maternity colonies at four sites: Chick Evans Golf Course, Kickapoo Woods, Skokie Lagoons, and Whistler Woods. While there appears to be no bat occupancy at the colonies, bats were seen flying in the vicinity at Skokie Lagoons and Kickapoo Woods. Friends, in partnership with the Cook County Forest Preserves, has installed six bat maternity colonies in river-edge forest preserves. There are eight species of bats in the Chicago region and 13 species of bats in Illinois.

We invite you to learn more information and updates about future training opportunities and river ecology and wildlife.