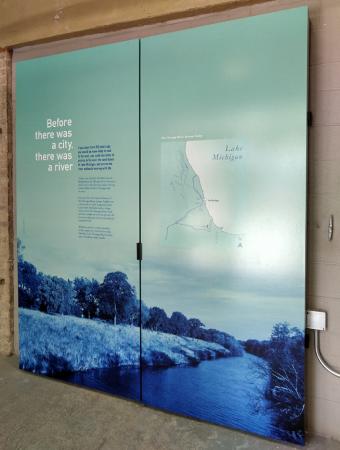 The award-winning exhibit is part of a major update of the museum’s exhibits last summer that showcases a river teeming with wildlife.
June 14, 2021

The McCormick Bridgehouse & Chicago River Museum, and our partners at the design firm Space Haus, received an award last week from the American Alliance of Museums (AAM) in its Excellence in Exhibition Label Writing Competition. The annual competition invites writers, editors, and museum visionaries to submit their best labels – the primary tool for sharing ideas, information, and stories with the public – for judging by a diverse selection of esteemed jurors from the museum and heritage sector.

The entry from the Bridgehouse Museum entitled “A River and Its City” is the large interpretive panel exhibit located directly opposite the museum entrance. As the first interpretive content encountered by visitors, the exhibit invokes curiosity and excitement as well as orients visitors geographically and temporally. As part of the museum’s mission to foster both a sense of wonder and a sense of responsibility for the Chicago River, the panel exhibit invokes a river system once untouched.

What makes a good label according the AAM?

The award-winning exhibit is part of a major update of the museum’s exhibits last summer that showcases a river teeming with wildlife. The exhibits reflect the action and advocacy of Friends and our partners to improve the health of the river through the implementation of water quality standards, disinfection to protect recreational users, more open space, and wildlife restoration. The new exhibits also explore the improved connectivity of the river for people and wildlife, the effects of the climate crisis on the river system, the creation of a blue-green corridor of interconnected green spaces, the Clean Water Act, and nature-based green infrastructure.

﻿Numerous dignitaries, supporters and partners joined Friends last August to unveil the exhibits at a celebration of the dramatic turnaround in the health of the Chicago River system at the Bridgehouse Museum’s grand re-opening ceremony attended by commissioners of the MWRD and officials from the City of Chicago.