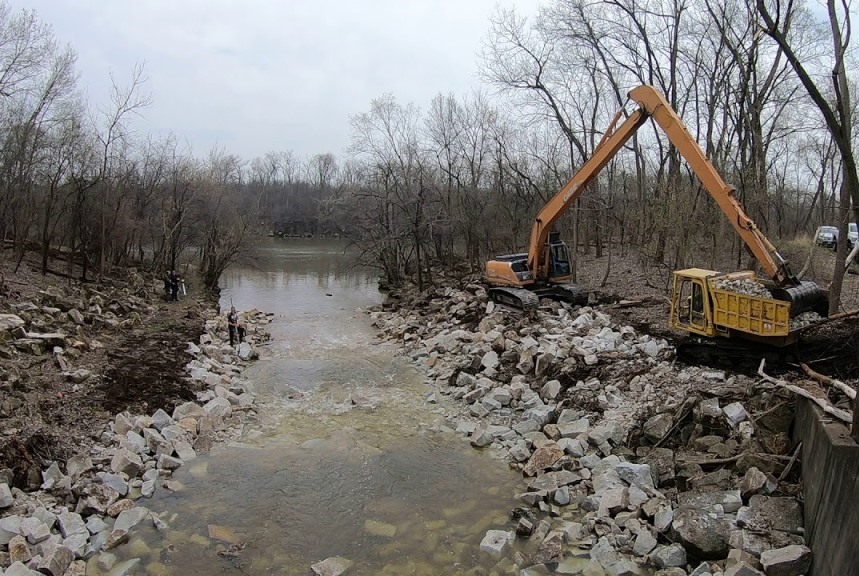 Re-connecting Mill Creek in 2019 shows five new species of fish, including channel catfish and pumpkinseed, moved up into Mill Creek just months after the barriers were removed.
November 18, 2021

Friends of the Chicago River is being honored by Chicago Wilderness with a 2021 Dr. George B. Rabb Force of Nature Award for its “bold and exceptional work” to reconnect southwest suburban Mill Creek to the Cal-Sag Channel; reversing a nearly 100-year-old decision to separate the two waterways and reestablishing access to the high quality creek that provides excellent habitat for native fish and other aquatic life.

The nearly $250,000 restoration project was headed by Friends of the Chicago River and the Illinois Department of Natural Resources (IDNR) and funded by the Chi-Cal Rivers Fund.

The 2019 project in the Palos region – which was reported on by the Daily Southtown – removed thousands of pounds of limestone and concrete shelves which blocked passage from the Cal-Sag Channel into the creek and added naturalistic rock and pool formations enabling fish to swim upstream. The barriers were an unfortunate byproduct of digging the Cal-Sag Channel, completed in 1922. The blockages were just above where the creek flows into the Cal-Sag near Palos Park, and the now beautiful cascade of the creek is visible from the Cal-Sag Bike Trail just east of LaGrange Road. Mill Creek runs over two miles to the Cal-Sag Channel which connects the Little Calumet River to the Chicago Sanitary and Ship Canal, part of the Chicago River system.

Fish monitoring by Friends and our partners at the IDNR and the Forest Preserves of Cook County shows five new species of fish, including channel catfish and pumpkinseed, moved up into Mill Creek just months after the barriers were removed. The new species join seven others that were previously located and represent some of about 17 species expected to colonize the creek over time. Last summer a team of aquatic biologists and researchers from the Metropolitan Water Reclamation District of Greater Chicago (MWRD) confirmed two native species of mussels in Mill Creek – fingernail clams and a juvenile giant floater. Mussels are an indicator species of water quality and filter water as they feed and breathe.

The awards ceremony is Wednesday, December 8 at the Thatcher Woods Event Pavilion in River Forest. The awards are presented every two years.